The Embassy of Libya in London is the diplomatic mission of Libya in the United Kingdom. Libya also maintains a Consular & Cultural Affairs Section at 61-62 Ennismore Gardens, Knightsbridge and a Medical Office at 22 Red Lion Street, Bloomsbury. 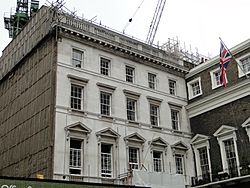 The embassy was formerly located in the St. James's district and was frequently targeted by protesters opposed to the rule of Muammar Gaddafi. One of these protests, in 1984, led to shooting of the British police officer Yvonne Fletcher and the subsequent siege of the embassy by armed police. Diplomatic relations with Libya were broken off and were not resumed until 1999, whereupon the embassy was moved to its current location in Knightsbridge.

The embassy was again the focus of attention in 2011 during the Libyan Civil War. There were several protests in the early part of the year against the Gaddafi government's crackdown on protesters in Benghazi, culminating in the occupation of the embassy's roof and the swapping of the flag with that of the National Transitional Council (now the current Libyan flag). In July of that year the British government expelled the existing embassy staff and formally recognised the NTC as the sole legitimate authority in Libya.

All content from Kiddle encyclopedia articles (including the article images and facts) can be freely used under Attribution-ShareAlike license, unless stated otherwise. Cite this article:
Embassy of Libya, London Facts for Kids. Kiddle Encyclopedia.