Muammar al-Gaddafi was born in a tent near Qasr Abu Hadi. His family came from a small tribal group called Qadhadhfa. His family were Arabized Berber in heritage. He joined the Libyan military in 1961; the military was one of the only ways for lower class Libyans like him to rise in social status. al-Gaddafi was a colonel.

He had ruled Libya from September 1, 1969 to August 23, 2011. Gaddafi became head of state after removing King Idris from power in a 1969 bloodless coup. After the coup, Gaddafi started the Libyan Arab Republic. He was one of the longest-serving rulers in history who was not a king or a queen, because he had ruled for more than 41 years. Gaddafi used Arab socialist and Arab nationalist ideas.

He published a book about his philosophical views in 1975. This book is commonly known as The Green Book.

In 1977, he left the power of Libya, and continued playing role of revolutionary, people called him the "Brother Leader and Guide of the Revolution".In the 1980s, he developed chemical weapons, because of it critics called Libya a pariah state. A Dutch investigation found that Gaddafi had built up a "billion-dollar empire", from assets in an international company in the oil industry. It also claims that his assets are scattered throughout much of Europe, Despite no trace or proof for even 1 billion have been found.

Gaddafi had a strong interest in geo-political control, was a firm supporter of OAPEC and led a Pan-African campaign for a United States of Africa. In 1986 Libya was bombed by the US, the home of Gaddafi was targeted but he survived. The bombing was condemned by many nations and also by UN. In 1992, sanctions were imposed on Libya by a few western countries. After these events, Gaddafi started to have closer economic and security relations with the West. He cooperated with investigations into alleged Libyan anti-western acts, by 1999 he offered to dismantle Weapon of Mass Destruction of Libya, which would be inspected in 2003. As a result, the UN sanctions were lifted in the same year.

In February 2011 there were major violent protests against Libyan government. These came alongside other demonstrations in Tunisia, Egypt, and other parts of the Arab world. The protests quickly turned into a civil war. Gaddafi vowed to "die a martyr" if necessary in his fight against rebels and external forces; he also said that "peaceful protest is one thing but armed rebellion is another."

Gaddafi was captured alive and killed in Sirte, Libya, on 20 October 2011. 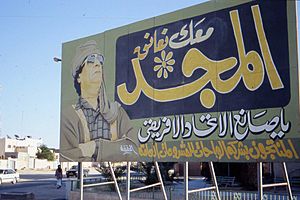 A poster of Gaddafi in Ghadames. 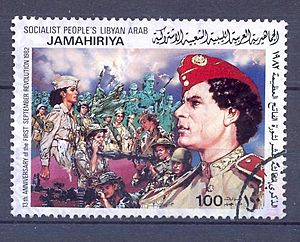 International reactions to Gaddafi's death were divided. U.S. President Barack Obama stated that it meant that "the shadow of tyranny over Libya has been lifted," while UK Prime Minister David Cameron stated that he was "proud" of his country's role in overthrowing "this brutal dictator".

Contrastingly, former Cuban President Fidel Castro commented that in defying the rebels, Gaddafi would "enter history as one of the great figures of the Arab nations", while Venezuela's Chávez described him as "a great fighter, a revolutionary and a martyr."

Former South African President Nelson Mandela expressed sadness at the news, praising Gaddafi for his anti-apartheid stance, remarking that he backed the African National Congress during "the darkest moments of our struggle". Gaddafi was mourned as a hero by many across Sub-Saharan Africa; The Daily Times of Nigeria for instance stated that while undeniably a dictator, Gaddafi was the most benevolent in a region that only knew dictatorship, and that he was "a great man that looked out for his people and made them the envy of all of Africa."

The Nigerian newspaper Leadership reported that while many Libyans and Africans would mourn Gaddafi, this would be ignored by Western media and that as such it would take 50 years before historians decided whether he was "martyr or villain."

Following his defeat in the civil war, Gaddafi's system of governance was dismantled and replaced by the interim government of the NTC, which legalised trade unions and freedom of the press. In July 2012, elections were held to form a new General National Congress (GNC), which officially took over governance from the NTC in August.

In January 2013, the GNC officially renamed the Jamahiriyah as the "State of Libya". The pro-Gaddafists remaining in Libya came to be known as the Green Movement, and were formalized into the Libyan Popular National Movement party, established by Khuwaildi al-Hamidi. The Libyan government prevented this party from taking part in the 2012 parliamentary elections and banned the display of Gaddafist symbols.

All content from Kiddle encyclopedia articles (including the article images and facts) can be freely used under Attribution-ShareAlike license, unless stated otherwise. Cite this article:
Muammar al-Gaddafi Facts for Kids. Kiddle Encyclopedia.