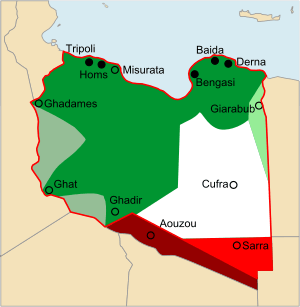 Italian Libya was a colony of the Kingdom of Italy, from 1911 to (officially) 1947. Italy Libya in 1911 from the Ottoman Empire. Libyan Muslims continued fighting against the Christian Italians for some years, mainly during World War I.

Fighting increased after the dictator Benito Mussolini took power in Italy. Idris (later King of Libya) fled to Egypt in 1922. From 1922 to 1928, Italian forces under General Badoglio waged a "punitive pacification" campaign. Badoglio's successor in the field, Marshal Rodolfo Graziani, accepted the commission from Mussolini on the condition that he was allowed to crush Libyan resistance without having to follow either Italian or international law. Mussolini reportedly agreed immediately and Graziani intensified the oppression. Some Libyans continued to defend themselves, with the strongest voices of dissent coming from Cyrenaica. Omar Mukhtar, a sheikh of the Sennusi tribe, became the leader of the uprising.

After a much-disputed truce on 3 January 1928, the Italian policy in Libya reached the level of full-scale war, including deportation and concentration of people of northern Cyrenaica to deny the rebels the support of the local population. After Omar Mukhtar's capture September 15, 1931 and his execution in Benghazi, the resistance petered out. Limited resistance to the Italian occupation crystallized round Sheik Idris, the Sennusi Emir of Cyrenaica. 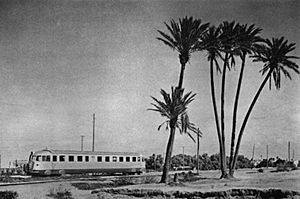 By 1934, Libya was fully pacified and the new Italian governor Italo Balbo started a policy of integration between the Arabs and the Italians. New laws in 1939 allowed Muslims to join the National Fascist Party and in particular the "Muslim Association of the Lictor" (Associazione Musulmana del Littorio). The 1939 reforms also allowed the creation of Libyan military units within the Italian army. During the North African Campaign of World War II this brought strong support for Italy among many Muslim Libyans, who enrolled in the Italian Army

Governor Balbo created "Libya" in 1934, with the unification of Tripolitania, Cyrenaica and Fezzan in a single country. He developed the new "Italian Libya" from 1934 to 1940, creating a huge infrastructure including 4,000 km of roads, 400 km of narrow gauge railways, new industries, and many new agricultural villages.

The Libyan economy prospered, mainly in the agricultural sector. Even some manufacturing activities were developed, mostly related to the food industry. Many building were made. Furthermore, the Italians made modern medical care available for the first time in Libya and improved sanitary conditions in the towns. It was also created a huge web of connections to Italy, by sea and by air (like the Linea dell'Impero, an air route that united Libya with Rome and with Ethiopia/Somalia).

Libya was an important theater of war in World War II. On 13 September 1940, Italian forces used the "Via Balbia" (Mussolini's highway in northern Libya) for the invasion of Egypt. British and allied Allied forces from Egypt, commanded by Wavell made a successful two-month campaign in (Tobruk, Bengasi, El Agheila). Counteroffensives under Rommel in 1940-43, also took place here. In November 1942, the Allied forces retook Cyrenaica; by February 1943, the last German and Italian soldiers were driven from Libya.

All content from Kiddle encyclopedia articles (including the article images and facts) can be freely used under Attribution-ShareAlike license, unless stated otherwise. Cite this article:
Italian Libya Facts for Kids. Kiddle Encyclopedia.