Eni S.p.A. (NYSE: E) is an Italian multinational oil and gas company. Eni is present in 70 countries, and currently is Italy's largest industrial company. It has a market capitalization of US$ 55.61 billion, as of 31 December 2019. The Italian Government owns a 30.303% golden share in the company. Golden shares are special stock shares that allow the government to control a company. 3.934% of the shares are held through the state Treasury and 26.369% are held through the Cassa depositi e prestiti (a bank mostly owned by the Ministry of Economy and Finance of Italy). Eni ranks among the top 100 on Fortune Global 500 list for largest companies by revenue. 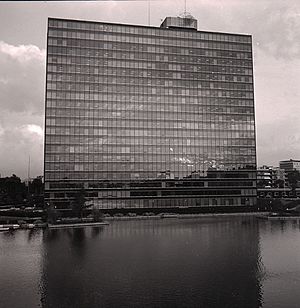 Agip was started in 1926. After World War II, Enrico Mattei was appointed Special Administrator to close down Agip. With the discovery of the Caviaga gas field in the Po Valley, the process of closing Agip was halted. Enrico Mattei converted it to a state monopoly (a company with no competition), and renamed it Eni. Eni comes from the company's original full name Ente Nazionale Idrocarburi (National Hydrocarbons Agency). Eni was to supply energy to Italy and contribute to the country's industrial development.

Eni decided that natural gas would supply the energy needed from the crisis of the 1973 oil embargo. They import gas from the Soviet Union and the Netherlands. Snam started the Transmediterranean pipeline, moving gas from the Hassi-R-Mel field in Algeria to the Po Valley. The gas pipeline was more than 2,500 km or 1550 miles long. It started in the Algerian desert and crosses Tunisia. It then crosses the Sicilian Channel at a water depth of over 650 metres or 2100 feet. Next it goes through Sicily and up the length of the entire Italian peninsula.

In the 1990s, Eni changed from a public corporation into a joint stock company. Most of Eni's share capital was put on the market in four successive public issues. Agip's international work increased with new acquisitions in Algeria, China, Angola, the North Sea and Egypt. New agreements were signed with Kazakhstan, Azerbaijan and for the Nigerian and Angolan deep water oil. Eni incorporated Agip, and became an oil and gas producer. Eni's daily oil and gas production reached the equivalent of 1,871 million barrels of oil.

In the 2000s, Eni started many projects for the production of renewable sources in Italy, such as the conversion of its refineries in Porto Marghera and in Gela into biorefineries (refineries that convert organic material to energy), or Progetto Italia, to build photovoltaic plants in Sardinia (Assemini, Porto Torres).

Eni operates in the exploration (searching) and production of hydrocarbons (oil and natural gas) in Italy, North Africa, West Africa, the North Sea, the Gulf of Mexico and Australia. It also operates in areas with great potential to produce oil such as the Caspian Sea, the Middle and Far East, India and Alaska.

Eni operates Saipem, a subsidiary, and owns 30.54% of the company. Saipem works in engineering, and oilfield services and construction.

Eni is one of the majors operators in refining and marketing of petroleum products in Italy. Eni is also engaged in retail and wholesales activities in Central Europe and Eastern Europe.

Since 2007, Eni ranked in the Dow Jones Sustainability World Index and it was also included in the FTSE4Good Index , two famous indexes that evaluate the sustainability performance and the ethical investments of the companies on the stock exchange. In 2013 Eni was the only FTSE MIB (Milano Italia Borsa) company to have the triple E for Standard Ethics . Eni is among the Top 10 companies by sustainability score in the WBCSD rank, a rank conceived by a global organization including over 200 international companies that works on issues related to sustainable development. Eni is involved in many projects to help fighting the climate change and cooperates with several institution to reduce its impact on the environment.

All content from Kiddle encyclopedia articles (including the article images and facts) can be freely used under Attribution-ShareAlike license, unless stated otherwise. Cite this article:
Eni Facts for Kids. Kiddle Encyclopedia.