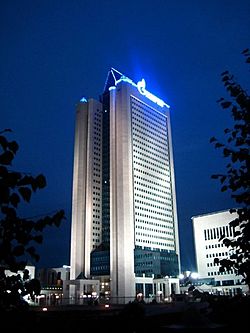 Gazprom (Russian: Газпром) is the largest Russian company headquartered in Moscow that was founded in 1989. It is the largest natural gas extractor in the world.

The company is majority owned by the Government of Russia, via the Federal Agency for State Property Management and Rosneftegaz [ru].

All content from Kiddle encyclopedia articles (including the article images and facts) can be freely used under Attribution-ShareAlike license, unless stated otherwise. Cite this article:
Gazprom Facts for Kids. Kiddle Encyclopedia.