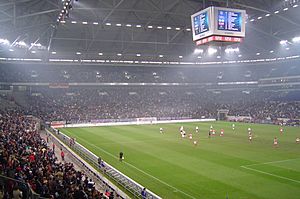 Veltins Arena, the home stadium of the FC Schalke 04.

The Fußball-Club Gelsenkirchen-Schalke 04, commonly known as FC Schalke 04, is a successful and popular German football club.

It plays in Gelsenkirchen. With more than 80.313 members (15. Dezember 2009) at present it is the second largest Sportsclub of Germany and has departments for football, basketball, table tennis, handball and athletics. Since August 2001 the association plays its home plays in the Veltins arena (to 30 June 2005 Veltins Arena), one of the most modern stages of the world. In the coat of arms a white G is to be recognized, which stands for Gelsenkrichen.

There exists a great rivalry between Schalke 04 and Borussia Dortmund. The reason is the honorable competition of these clubs which live in neighborhood. Since the first match in 1925 there have been 135 matches. Schalke won 55 of them, Dortmund won 45 and 35 ended in a draw. In the 2009–10 Bundesliga season Schalke won both matches.

The football team is playing their home plays in the Veltins Arena. 61,673 people can visit the stadium for football matches in national, or 54,442 in internation competitions. During other events as for example concerts or opera plays 79,296 people can take place in the stadium. Its was also one of the 12 venues for the 2006 FIFA World Cup in Germany and the final of the 2003–04 UEFA Champions League between FC Porto and AS Monaco has been played there.

The current coach (and Manager) of Schalke 04 is Jens Keller.

All content from Kiddle encyclopedia articles (including the article images and facts) can be freely used under Attribution-ShareAlike license, unless stated otherwise. Cite this article:
FC Schalke 04 Facts for Kids. Kiddle Encyclopedia.