The club was founded on 19 May 2009 by the Red Bull Company. It was formed out of the SSV Markranstädt. Due to the regulations of the DFB the name Red Bull Leipzig for marketing reasons was forbidden so they were called RB (short for RasenBallsport). Also the logo was forbidden. 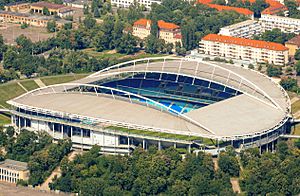 The company was sure that there is a great chance to form a new club, because with the Zentralstadion (now Red Bull Arena) there was a good stadium and there is no club in professional football in the area. The club is now in the the Bundesliga. Like in Salzburg many fans protested against this deal because they had the fear that the fanculture will vanish and football will be only a business. So they wanted a "normal" football club.

They started in the Oberliga Nordost-Süd(5th level) and became 1st in the 2009/10 season. But the next season they failed to gain promotion to the 3. Bundesliga. So the coach was changed, the new one is the Austrian Peter Pacult. The first match under the new coach was a 3:2 win in the German Cup (1st round) versus VfL Wolfsburg from the Bundesliga.

Players out on loan

All content from Kiddle encyclopedia articles (including the article images and facts) can be freely used under Attribution-ShareAlike license, unless stated otherwise. Cite this article:
RB Leipzig Facts for Kids. Kiddle Encyclopedia.