Marcel Sabitzer (born 17 March 1994) is an Austrian professional footballer who plays as a midfielder for Bundesliga club RB Leipzig and the Austria national team.

Sabitzer played for Admira Wacker Mödling between September 2010 and January 2013. He scored two goals in eight appearances during the 2010–11 Austrian Bundesliga.

On 30 May 2014, Sabitzer signed a four-year contract with RB Leipzig, and was loaned for a season to FC Red Bull Salzburg. 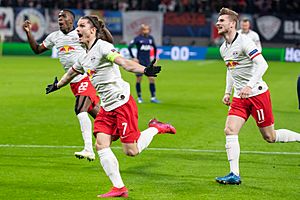 Sabitzer returned to RB Leipzig for the 2015–16 season, when he scored eight goals in 34 appearances. On 1 April 2016, Sabitzer extended his contract until 2021.

On 10 March 2020, Sabitzer scored twice in a 3–0 win over Tottenham Hotspur in the Champions League last 16, to help earn Leipzig a 4–0 aggregate victory and a place in the quarter finals of the competition for the first time in the club's history. 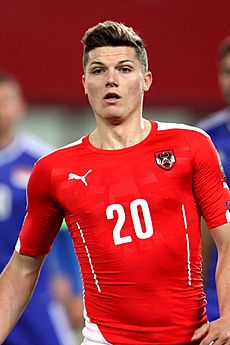 Sabitzer playing for Austria in 2015

Sabitzer made his debut for Austria on 5 June 2012, in a goalless draw against Romania.

He represented the national team at UEFA Euro 2016.

He is a son of former Austria international Herfried Sabitzer and the cousin of footballer Thomas Sabitzer.

All content from Kiddle encyclopedia articles (including the article images and facts) can be freely used under Attribution-ShareAlike license, unless stated otherwise. Cite this article:
Marcel Sabitzer Facts for Kids. Kiddle Encyclopedia.