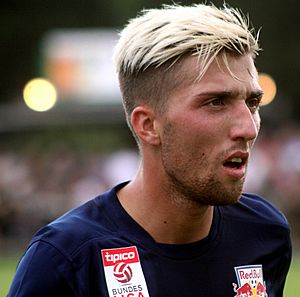 Kevin Kampl (born 9 October 1990 in Solingen) is a football player from Slovenia. He plays as a midfielder for FC Red Bull Salzburg in the Austrian Bundesliga.

Before he was born, Kampl's parents moved from Maribor to Solingen, where he started his career with VfB Solingen. From 1997 he went on to Bayer 04 Leverkusen. In 2010 he signed his first contract. Because he did not play much he went on loan to SpVgg Greuther Fürth. After he came back he was still part of the squad but still played seldomly. He went to VfL Osnabrück in the 3rd league. The next club was VfR Aalen, where he only played two months. Then he signed for FC Red Bull Salzburg. It is said that Salzburg payed €3 million for Kampl. Within a short time he became an important player. In his first season he scored four goals and gave 9 assists.

He played 17 matches for the Under-21 team of Slovenia. His first match for the team was on October 12, 2012 versus Cyprus.

All content from Kiddle encyclopedia articles (including the article images and facts) can be freely used under Attribution-ShareAlike license, unless stated otherwise. Cite this article:
Kevin Kampl Facts for Kids. Kiddle Encyclopedia.