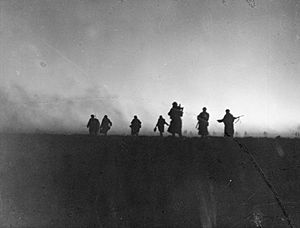 Australian troops advance towards an Italian position in north Africa, 1941

The North African Campaign was part of the Second World War. It took place in North Africa from 10 June 1940 to 13 May 1943. The campaign in north Africa included fighting in the Libyan and Egyptian deserts (the Desert War), and in Morocco and Algeria (Operation Torch) and Tunisia (Tunisia Campaign). 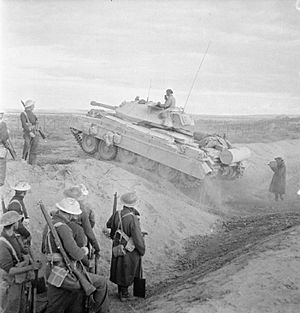 There was a see-saw series of battles for control of Libya and parts of Egypt. The Siege of Tobruk in 1941 was one of the turning points. In the Second Battle of El Alamein British Commonwealth forces under the command of Lieutenant general Bernard Montgomery decisive defeated the Afrika Korps and other Axis forces and pushed them back to Tunisia.

The late 1942 Allied landings in Operation Torch in North-West Africa was done to mop up the remaining enemy forces. There were battles against Vichy France forces which then changed sides. The Allies suffered a serious defeat at the Battle of the Kasserine Pass. Later, they defeated the Axis forces in southern Tunisia (battle of Mareth), then encircled the remaining Italian & German troops in northern Tunisia and finally forced their surrender.

After the fall of Tunis, the last troops to surrender were the Italians of general Messe in May 13, 1943 in the northern Tunisian peninsula of Cape Bon.

All content from Kiddle encyclopedia articles (including the article images and facts) can be freely used under Attribution-ShareAlike license, unless stated otherwise. Cite this article:
North African Campaign Facts for Kids. Kiddle Encyclopedia.