Stephanie Hope Flanders (born 5 August 1968) is a British former broadcast journalist who was the BBC economics editor for five years. In November 2013, she left the BBC for a role as J.P. Morgan Asset Management's chief market strategist for Britain and Europe. In June 2017, it was announced that she would return to journalism and would join Bloomberg in October 2017 to lead a new unit called Bloomberg Economics. She is the daughter of British actor and comic singer Michael Flanders and activist Claudia Cockburn.

Flanders' father, Michael Flanders, died in 1975 when she was six years old. She attended St Paul's Girls' School and Balliol College, Oxford, where she obtained a first class degree in Philosophy, Politics and Economics. She then attended Harvard University as a Kennedy Scholar.

Flanders began her career as an economist at the London Business School and the Institute for Fiscal Studies. She then became a leader writer and columnist at the Financial Times from 1994. She became a speechwriter and advisor to U.S. Treasury Secretary Lawrence H. Summers in 1997, and joined the New York Times in 2001.

Flanders joined the BBC's Newsnight in 2002. A keen cyclist, in 2005 she presented a review of Britain's economic status for Panorama from her bicycle, travelling the length of the country. She also contributed (with reference to her father's song "A Transport Of Delight") to the BBC News coverage of the last of the AEC Routemaster buses. In 2006 and 2007 she presented some relief shifts for BBC News between 2 pm and 5 pm. She has anchored editions of Newsnight with an economic focus.

On a Newsnight programme in August 2007, Flanders interrogated Conservative Party leader David Cameron about his proposed policy of tax breaks for married couples while questioning him with other journalists, asking him whether he had ever met anyone who would get married for an extra £20 per week. As an unmarried mother, she also asked Mr. Cameron whether the Conservative Party would like her to be married. 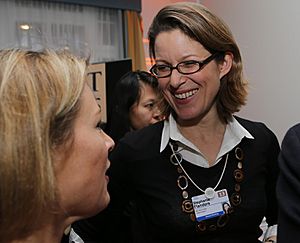 In February 2008 it was announced that she would replace Evan Davis as BBC economics editor, since he was moving to present Radio 4's Today programme. She took up this position on 17 March, although from June of that year until January 2009, deputy economics editor Hugh Pym temporarily replaced her as the main economics editor whilst she was on maternity leave.

She presented a programme called "Stephanomics" on BBC Radio Four during July 2012. This programme asked questions about the world's economy, such as whether China or the United States would be the more important economic power. Another series of this programme began to be broadcast on Radio Four in April 2013. In 2012, Flanders presented Masters of Money, a BBC Two documentary series exploring the lives of Karl Marx, John Maynard Keynes, and Friedrich Hayek. In August 2012 Secretary of State for Work and Pensions Iain Duncan Smith made a formal complaint to the BBC claiming that there was a pro-Labour bias in her coverage of unemployment figures. The BBC stated in response that they were satisfied that their coverage was impartial.

Aside from her work as economic editor, Flanders presented The Andrew Marr Show during August 2009 to cover for Andrew Marr, and was an occasional relief presenter of Newsnight until she left the BBC. In 2009, Flanders played herself in a BBC Radio production of the Julian Gough short story The Great Hargeisa Goat Bubble. Set in Somaliland in the 1980s, the story is an allegorical analysis of certain aspects of modern economics, such as automatic trading, and complex financial derivatives.

On 26 September 2013 it was announced that Flanders would leave the BBC to join J.P. Morgan Asset Management where she would be chief market strategist for Europe and the UK. Guardian columnist Peter Preston mourned the BBC's loss, writing "She wasn't a simple reporter, talking to people and reading the runes: she was an intellectual player in a vital, but often arcane, area." She was replaced as economics editor by the BBC's business editor, Robert Peston. She still occasionally appears as an expert and presents programmes for the BBC.

She is a granddaughter of communist British journalist Claud Cockburn and his first wife, communist American writer Hope Hale Davis. Claud Cockburn's three sons (with third wife, Patricia Byron (née Patricia Evangeline Anne Arbuthnot)), the journalists Alexander Cockburn, Andrew Cockburn and Patrick Cockburn are/were her uncles. The US-based journalist Laura Flanders is her sister, and the film and television actor Olivia Wilde is a cousin. The writer and translator Lydia Davis is an aunt. She is distantly related to the novelist Evelyn Waugh. She is a daughter of Claudia Cockburn Flanders, who worked to improve access to public transport for people with disabilities.

Flanders and her husband John Arlidge (another journalist who has written for The Guardian, The Observer and other newspapers) have a son called Stanley, born in 2006, and a daughter, born in 2008.

In June 2007 Flanders presented an edition of BBC Radio 4's Archive Hour about her father's career, titled Flanders on Flanders.

All content from Kiddle encyclopedia articles (including the article images and facts) can be freely used under Attribution-ShareAlike license, unless stated otherwise. Cite this article:
Stephanie Flanders Facts for Kids. Kiddle Encyclopedia.