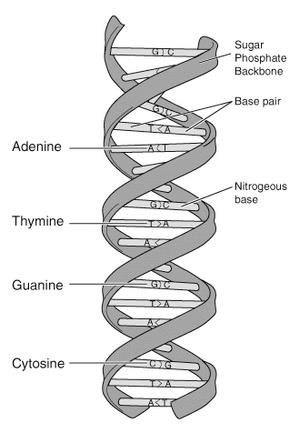 Diagramatic representation of the key structural features of the DNA double helix. This figure does not depict B-DNA.

"Molecular Structure of Nucleic Acids: A Structure for Deoxyribose Nucleic Acid" was the first article published to describe the discovery of the double helix structure of DNA, using X-ray diffraction and the mathematics of a helix transform. It was published by Francis Crick and James D. Watson in the scientific journal Nature on pages 737–738 of its 171st volume (dated 25 April 1953).

This article is often termed a "pearl" of science because it is brief and contains the answer to a fundamental mystery about living organisms. This mystery was the question of how it is possible that genetic instructions are held inside organisms and how they are passed from generation to generation. The article presents a simple and elegant solution, which surprised many biologists at the time who believed that DNA transmission was going to be more difficult to deduce and understand. The discovery had a major impact on biology, particularly in the field of genetics, enabling later researchers to understand the genetic code.

The application of physics and chemistry to biological problems led to the development of molecular biology, which is particularly concerned with the flow and consequences of biological information from DNA to proteins. The discovery of the DNA double helix made clear that genes are functionally defined parts of DNA molecules, and that there must be a way for cells to translate the information in DNA to specific amino acids, which are used in order to make proteins.

Max Delbrück was a physicist who recognized some of the biological implications of quantum physics. Delbruck's thinking about the physical basis of life stimulated Erwin Schrödinger to write, What Is Life? Schrödinger's book was an important influence on Crick and Watson. Delbruck's efforts to promote the "Phage Group" (exploring genetics by way of the viruses that infect bacteria) was important in the early development of molecular biology in general and the development of Watson's scientific interests in particular.

Crick, Watson, and Maurice Wilkins who won the Nobel Prize for Medicine in recognition of their discovery of the DNA double helix.

All content from Kiddle encyclopedia articles (including the article images and facts) can be freely used under Attribution-ShareAlike license, unless stated otherwise. Cite this article:
Molecular Structure of Nucleic Acids: A Structure for Deoxyribose Nucleic Acid Facts for Kids. Kiddle Encyclopedia.