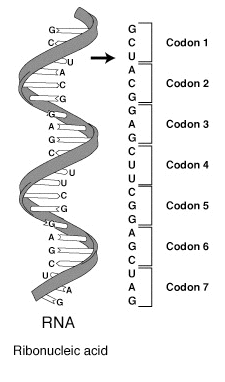 A series of codons in part of a messenger RNA (mRNA) molecule. Each codon consists of three nucleotides. This usually represents a single amino acid. The nucleotides are shown by the letters A, U, G and C. This is mRNA, which uses U (uracil). DNA uses T (thymine) instead.

The genetic code is the set of rules by which information encoded within genetic material (DNA or mRNA sequences) is translated into proteins by living cells. Biological decoding is done by the ribosome. This links amino acids together in an order specified by mRNA. It uses transfer RNA (tRNA) molecules to carry amino acids and to read the mRNA. The molecules read the mRNA three nucleotides at a time. These nucleotide triplets are called codons. A codon specifies which amino acid will be added next during protein synthesis. There are some exceptions, but usually a three-nucleotide codon represents a single amino acid.

The genetic code among all organisms is very similar. It can be expressed in a simple table with 64 entries.

The genetic code decides the protein sequence for a given coding region (gene). Other regions in the genome can influence when and where these proteins are produced.

All content from Kiddle encyclopedia articles (including the article images and facts) can be freely used under Attribution-ShareAlike license, unless stated otherwise. Cite this article:
Genetic code Facts for Kids. Kiddle Encyclopedia.