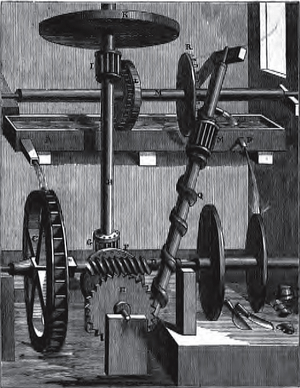 Robert Fludd's 1618 "water screw" perpetual motion machine from a 1660 woodcut. Many people think this device is the first recorded attempt to describe such a device in order to produce useful work - driving millstones.

Perpetual motion refers to a movement that goes on forever once started without additional energy added. A machine that could be set in motion once would continue to move forever. Such a device or system would be against the law of conservation of energy. This law states that energy cannot be created, or destroyed, but one form of energy can be transformed into a different one.

Perpetual motion machines have interested inventors for a long time, and even though it has been shown that such a machine cannot exist, people still try to build them.

Perpetual motion machines have been classified into different types. Each type breaks a different law of thermodynamics:

All content from Kiddle encyclopedia articles (including the article images and facts) can be freely used under Attribution-ShareAlike license, unless stated otherwise. Cite this article:
Perpetual motion Facts for Kids. Kiddle Encyclopedia.