Tasman Peninsula is 75 km by road south-east of Hobart, at the south east corner of Tasmania, Australia. 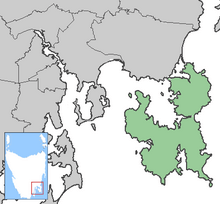 Map showing both the Forestier and Tasman Peninsulas

There are a lot of things for visitors to see including the Conservation Park, on the main highway at Taranna, the Port Arthur Historic Site and a number of beaches.

The first people to live here were the Australian aborigines. They were part of a group known as the Ostyer Bay tribe. This large group lived on the east coast of Tasmania. The Tasman Peninsula is named after Dutch explorer Abel Tasman.

The first European settlement of the Peninsula was Port Arthur in the 1830s. It was selected as a penal colony because it was isolated from the rest of Tasmania. It could be easily got to by sea. The other prison colony at Macquarie Harbour on the west coast was too difficult to get to by sea. The prisoners there were moved to a new prison at Port Arthur. The peninsula also had a lot of trees that could be used for ship building and building houses. It had a deep sheltered harbour where visiting British warships could be repaired. Eaglehawk Neck was lined with guards and guard dogs, to prevent the escape of any convicts. Some did escape, including the bushranger Martin Cash.

The Saltwater River, Tasmania historic site (entry free) is near the north west tip of the peninsula. It was originally the site of a coal mine. Prisoners dug for coal during the day and lived in underground cells at night.

The prison at Port Arthur is now a tourist attraction. Tourism is a major business in most of Tasmania. Bushwalking is also popular in the remote parts of the peninsula. Popular places to walk to include Cape Raoul and Cape Pillar at the south west and south east ends of the Peninsula, on either side of the entrance to Port Arthur.

It is now the main area in the battle to save the Tasmanian Devil from extinction. The devils have been getting a new type of cancer called Devil Facial Tumour Disease (DFTD). It has spread quickly through the devil population. The disease has already killed more than half of the Tasmanian devils.

The peninsula's isolation from the Tasmanian mainland is ideal for keeping a healthy wild Tasmanian devil population. This project involves the local Tasmanian Devil Conservation Park at Taranna and government and university scientists.

The rocky coastline has been the site of a number of shipwrecks. Two large steam ships have sunk after hitting the Hyppolyte Rocks off the east coast - the Tasman in 1883 and the Nord in 1915. Munroe Bight to the north of Cape Pillar is named after the American ship James Munroe wrecked there in 1850.

In the years between convict settlement and the start of the modern tourist industry the area most people worked in the timber industry and fishing. The area was not suitable for big farms. There are some fruit orchards and some small mixed farms. The area was isolated until a regular river steamer began sailing from Port Arthur to Hobart in the 1880s. From 1900 to the 1930s the main shipping company was the Huon, Channel & Peninsula Steamship Company. They owned several ships including the M.V. Cartela.

Many smaller towns are also on the Tasman Peninsula. The largest are Nubeena and Koonya. Smaller villages are Premaydena, Highcroft and Stormlea.

The local government area is the Tasman Council. The major road to Hobart is called the Arthur Highway. The current population is around 2000. In summer the area gets many visitors and the population rises to around 6000.

The Tasman Peninsula is well known for its rocky eastern coastline. Much of it is now in the Tasman National Park. At Eaglehawk Neck the rocks have made many strange shapes and patterns. These include Remarkable Caves, Tasman's Arch and the Tessellated Pavement. On the south of the peninsula are the highest sea cliffs in the southern hemisphere, rising 300 m above the Tasman Sea at Cape Hauy. The peninsula is claimed as one of Australias best surfing spots at Cape Roaul and Roaring Beach.

All content from Kiddle encyclopedia articles (including the article images and facts) can be freely used under Attribution-ShareAlike license, unless stated otherwise. Cite this article:
Tasman Peninsula Facts for Kids. Kiddle Encyclopedia.