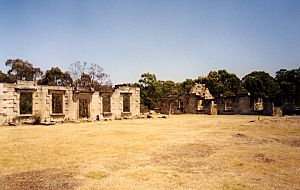 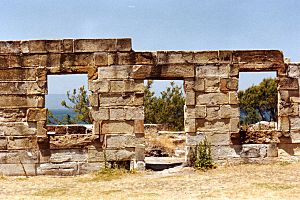 The Saltwater River area contained two penal settlements. One was an agricultural settlement, which produced vegetables, wheat, and had a piggery. The other was a coal mine, known amongst convicts for its hellish conditions. It is now on the Australian National Heritage List as the Coal Mines Historic Site.

Today, only ruins exist at the site, which include underground cells.

All content from Kiddle encyclopedia articles (including the article images and facts) can be freely used under Attribution-ShareAlike license, unless stated otherwise. Cite this article:
Saltwater River, Tasmania Facts for Kids. Kiddle Encyclopedia.