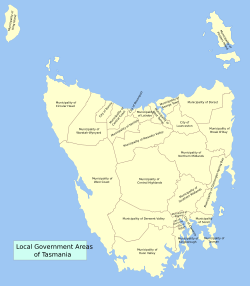 Local government areas (LGAs) in the Australian state of Tasmania describes the 29 organisations and processes by which towns and districts can manage their own affairs. The LGAs are grouped by region.

This article also includes lists of towns, suburbs and localities of Tasmania.

All content from Kiddle encyclopedia articles (including the article images and facts) can be freely used under Attribution-ShareAlike license, unless stated otherwise. Cite this article:
Local government areas of Tasmania Facts for Kids. Kiddle Encyclopedia.