Wynyard is a rural town on the north-west coast of Tasmania, about 17 kilometres (11 mi) west of Burnie. At the 2011 census Wynyard had an urban population of 5,061 and a total greater area population of 5,990. The town is a regional hub servicing the surrounding rural areas, the adjacent Burnie Wynyard Airport provides commercial flights to Melbourne and other districts. The main council offices for the Waratah-Wynyard local government area are located in Wynyard.

Three ex-convict Alexander brothers established a settlement, Alexandria, on the west, or Table Cape, side of the Inglis River in the 1850s. They bought large areas of farmland on Table Cape and built several small ships for produce and timber trading. Shortly afterwards, Wynyard town, on the east side of the river, was laid out, but lagged well behind Alexandria which had a church and several shops including a blacksmith and general store. After the Inglis River was bridged in 1861, Alexandria began to fade and Wynyard, with better wharfing, became the district's centre of commerce.

Wynyard was probably named after Major-General Edward Buckley Wynyard in the early 1850s. Table Cape Post Office opened around 1856 and was renamed Wynyard in 1882.

Wynyard handled more shipping than Burnie in the late nineteenth century and its population reached 500 by 1900. However, in the 20th century Burnie flourished and become the dominant regional and industrial hub for the region.

Coast FM is a volunteer community radio station servicing the North-West coast of Tasmania, with the studio based in Wynyard.

The Wynyard Yacht Club was established in 1961 and is situated near the mouth of the Inglis River, the club has received national recognition for its inclusiveness programs.

The Wonders of Wynyard visitor information centre hosts a substantial classic vintage cars collection which was donated to the Waratah-Wynyard Council by the collector and restorer, Fracis Ransley.

Freestone Cove is a small sheltered bay on the northern fringes of Wynyard, towards Table Cape. 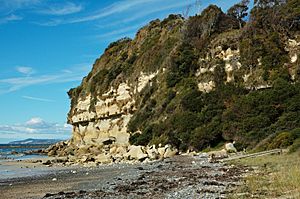 Fossil bluff is a small protrusion of sandstone cliffs rising about 30 metres (98 ft) from the coastline at Freestone Cove. In the 19th century, it was the discovery site of Australia’s oldest fossil marsupial, Wynyardia bassiana, an extinct possum-like animal from the early Miocene (about 25 million years ago). Also recovered was an extinct genus of whale, Prosqualodon. 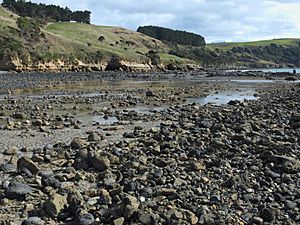 Location of the tidal fish traps at Freestone Cove

It is believed the Aboriginal Tommeginer clan built tidal fish traps with rocks at Freestone Cove, the rocks are still evident today and are protected under the Aboriginal Relics Act. The Tommeginer tribe lived in the region along the coastline around Wynyard and Table Cape until soon after the arrival of Europeans in the 19th century.

A considerable number of tidal fish traps have been found in the north and north-west of the state. The phenomena is attributed to the mean tidal range of two metres along this stretch of coastline, which is ideal for this type of construction. Whilst some of these traps were certainly built by Europeans, there is good reason to believe others were of Aboriginal construction, such as at Freestone Cove. Three other traps located at nearby Rocky Cape, Sisters Beach and Boat Harbour do not have established European origins, furthermore, all are located within the territory which was occupied by the Tommeginer tribe.

Tidal fish traps must be located close to settlements or camps so that they can be monitored. Because as the tide ebbs, any fish caught in the shallows fall easy prey to scavenging seabirds. The Freestone Cove traps are located a considerable distance from the nearest early European settlement of Alexandria, but were close to known Aboriginal campsites and several middens have been located along the shoreline nearby.

Wynyard is located around the mouth of the Inglis River, which extends approximately 61 kilometres to the Campbell Ranges near Takone.

Table Cape is a volcanic plug located about 4 kilometres (2.5 mi) north of Wynyard, the northern and eastern faces of the geological feature rise steeply from Bass Strait to a height of approximately 170 metres (560 ft) above sea level. The area is renowned for the annual flowering of tulips during spring and accompanying tulip festival. Situated on the edge of Table Cape is the heritage-listed Table Cape Lighthouse which remains in operation today. The lighthouse stands about 25 metres (82 ft) tall and has a maximum nautical range of 16 nautical miles (30 km; 18 mi).

All content from Kiddle encyclopedia articles (including the article images and facts) can be freely used under Attribution-ShareAlike license, unless stated otherwise. Cite this article:
Wynyard, Tasmania Facts for Kids. Kiddle Encyclopedia.