Latrobe is a town in northern Tasmania, Australia on the Mersey River. It is 8 km south-east of Devonport on the Bass Highway. It is the main centre of the Latrobe Council. At the 2006 census, Latrobe had a population of 2,843. By the 2011 census, this had increased to 3,897.

The Mersey Community Hospital is located in Latrobe. It is approximately a 100-bed hospital that provides services including: ambulatory and emergency, general adult medicine, general paediatric medicine, general surgery including orthopaedic, ear, nose and throat, ophthalmological, certain oncology services, limited rehabilitation services and allied health support. From 1 September 2008, the Hospital is owned by the Commonwealth and operated by the Tasmanian Government.

The main shopping district can be found along Gilbert Street where a number of hotels, cafes, restaurants and shops call home, such as Supa IGA.

The Australian Axemans Hall of Fame showcasing Australia’s wood-chopping sporting champions is located on Bells Parade. The Big Platypus, one of Australia's big things, is outside the museum. 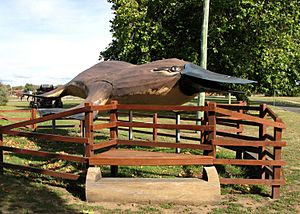 Big Platypus at the Australian Axeman's Hall of Fame

All content from Kiddle encyclopedia articles (including the article images and facts) can be freely used under Attribution-ShareAlike license, unless stated otherwise. Cite this article:
Latrobe, Tasmania Facts for Kids. Kiddle Encyclopedia.