Deloraine is a town on the Meander River, in the central north of Tasmania, Australia. It is 50 km west of Launceston and 52 km south of Devonport along the Bass Highway. It is part of the Meander Valley Council. Deloraine recorded a population of 2,848 in the 2016 census. Deloraine, like most Tasmanian towns, has a temperate and wet climate.

The region was explored in 1821 by Captain Roland, who was searching for farm land. The land was granted to new settlers, and the town is now a major agricultural centre, with a large number of farms of all types in the area. Deloraine is named after a character from the poem The Lay of the Last Minstrel, written by Sir Walter Scott. Deloraine Post Office opened on 29 October 1836.

Deloraine has one sister city, according to the Australian Sister Cities Association.

While Deloraine is a predominantly rural farming town, it is also aimed at pleasing tourists, who visit because of its culture and location also serving as a base to explore areas such as Cradle Mountain, the Great Western Tiers, Mole Creek and the Central Highlands. Farms in the area produce poppies, herbs, onions and potatoes; as is typical produce for the Tasmanian climate. Deloraine is also home to the 41° South salmon and ginseng aqua farm. 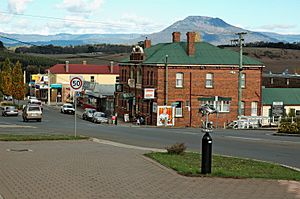 The main street of Deloraine, with the Great Western Tiers in the background.

The town currently operates two sawmills previously owned by Gunns as well as facilities that manufacture fertiliser, farm equipment, water tanks and street signs. The nearby opium processing factory, Tasmanian Alkaloids, located in Westbury offers some employment for the town.

The annual Tasmanian Craft Fair takes place in Deloraine, it attracts around 18,000 people annually. During the craft fair, there are around 260 exhibitors demonstrating crafts in the town. Because of this, as well as the large population of artists, the town is considered a cultural centre.

Because of its location between the two cities of Launceston and Devonport, Deloraine is a transport hub for trade and tourists between the two cities. Most local infrastructure and commercial buildings such as supermarkets, shops, schools, bus routes are also used by the nearby town of Westbury, and the hamlets of Exton, Mole Creek and Meander.

The Emu Bay/Meander Valley Road passes through the town.

One of the earliest railway lines in Tasmania was built between Launceston and Deloraine in 1871 to ship agricultural products into the city. It was constructed and operated by the private company, Launceston and Western Railway. The railway went bankrupt in 1872 after a mere year of operation and all assets were bought by the Tasmanian Government, as TasRail, in 1873.

Access to Deloraine is provided by the Bass Highway, part of Australia's National Highway, or by the older Meander Valley Road. Both the Meander River and a railway track that runs through the town from north Devonport through Deloraine and into Launceston and Central Tasmania. The train line is predominately used for cargo with rare tourist train use.

The town was bypassed by the new Bass Highway in the early 1990s.

All content from Kiddle encyclopedia articles (including the article images and facts) can be freely used under Attribution-ShareAlike license, unless stated otherwise. Cite this article:
Deloraine, Tasmania Facts for Kids. Kiddle Encyclopedia.