Coles Bay is an Australian town on the east Coast of Tasmania 192 km north-east of Hobart and 209 km south-east of Launceston, being the main entrance point for visitors to the Freycinet National Park.

It has a population of about 470 people including the surrounding area, but a large number of tourists visit the area for its scenery and outdoor activities, which include hiking, biking, fishing, boating and Sea kayaking.

The town is on the northern end of Great Oyster Bay with stunning views of the red and pink granite peaks known as The Hazards, on the Freycinet Peninsula. It is in the area of the Glamorgan Spring Bay Council.

Each Easter the town is one of the three locations for the Australian Three Peaks Race, a continuous sailing and running event starting at Beauty Point just north of Launceston and ending at Hobart with runners scaling three mountains including Mount Freycinet (33 km run; 620 m ascent).

Whaling parties, tin and coal miners pastoralists are some of the many people who have lived and worked on the Freycinet Peninsula since European settlement. These old mine shafts, old farmers' huts and whale shafts remains today attract many tourists.

In 1916 the area along with Mount Field became Tasmania's first national park.

The town became one of the first in the world to ban Plastic shopping bags in April 2003, after a two-year campaign. Local bakery owner and Coles Bay Tourism Association president Ben Kearney organised all the Coles Bay retailers to stop using plastic bags and worked with Planet Ark to introduce alternatives including recycled paper bags which can be purchased for a small fee and reusable calico shopping bags. On Australia Day 2005 Ben Kearney was declared Australia's Local Hero for 2005 for his commitment to the environment.

The Tasmanian Government awarded Coles Bay an Environmental Excellence Award for banning use of plastic bags. 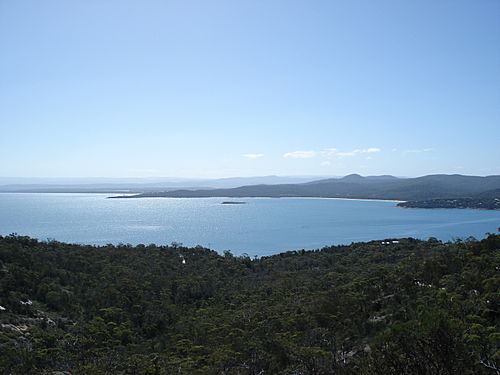 All content from Kiddle encyclopedia articles (including the article images and facts) can be freely used under Attribution-ShareAlike license, unless stated otherwise. Cite this article:
Coles Bay, Tasmania Facts for Kids. Kiddle Encyclopedia.