St Marys is a small township nestled at the junction of the Tasman Highway and the Esk Highway on the East Coast of Tasmania, Australia approximately 10 kilometres (six miles) from the coast.

It had a population of 682 as of the 2016 census, although in the early 2000s it was one of the fastest growing areas of Tasmania. The town is part of the Break O'Day Council. Its amenities include a craft gallery, bakery, accommodation, shops and supermarkets, and the St Marys Hotel, built in 1916, which dominates the town centre.

Located beneath a rocky outcrop, St Patricks Head (694 metres/2,277 feet), St Marys is a 240 kilometre/149 mile drive north east of Hobart, via Swansea and Bicheno or 130 kilometres/80 miles east of Launceston. It is possible to reach the town from the coast by crossing the mountains via St Marys Pass or Elephant Pass.

The first European contact with the district occurred when Captain Tobias Furneaux sighted and named the 694 metre St Patrick's Head in 1773. The early settlement of Van Diemen's Land, which mostly occurred between Hobart and George Town, took little interest in the St Marys area.

It wasn't until the 1840s that a probation station, housing 300 convicts, was built at Grassy Bottom between the town and St Marys Pass. They were assigned to build the road across the mountains to the east coast. This was done between 1843 and 1846.

The arrival of the railway in 1886 led to the town's increasing importance as a service centre. The Elephant Pass route was completed in 1888 and this resulted in goods moving across the mountains to the east coast settlements of Bicheno and Chain of Lagoons. In turn this resulted in a small increase in population as the town became a service centre for the surrounding dairy farms.

The railway line which was once so vital to the health of the town is now closed although the railway station still stands.

St Marys is close to many local attractions: you can try the challenging climb to the top of St Patricks Head, or the more accessible South Sister Peak, for stunning forest and coastal views, there are also spectacular views from Elephant Pass.

The Coalminers’ Heritage Wall and Heritage Walk at the tiny settlement of Cornwall is a monument to the miners who hand-tunnelled a coal mine beneath the Mount Nicholas Range.

You can also visit nearby waterfalls, go fishing at Lake Leake or bushwalking in Douglas Apsley National Park.

St Patricks Head - Travel east from St Marys and, as the road starts to rise, take the turn to the right up Irish Town Road. The road quickly becomes dirt. Follow the signs. It is a not an easy walk (there are places where metal cables and ladders are used to help the climber) but the view is spectacular and well worth the effort.

South Sister Peak - Take the German Town Road and turn left at the South Sister signpost. This is an easier lookout as the main vantage point is only a 10-15 minute walk from the car park. 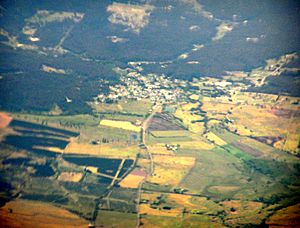 Christ Church - A strange little church standing in the middle of fields a few kilometres to the west of St Marys. The church was built in 1847 and was connected with the large property, 'Cullenswood', which was established in the late 1820s by Robert Vincent Legge who arrived in Van Diemen's Land in 1827. The main residence, 'Cullenswood', was built in 1845 and is located on Cornwall Road off the Esk Main Road. It is a two-storey rubblestone Georgian building with a columned verandah and iron-hipped roof. It is not open for inspection.

In December 2006, bushfires ravaged the nearby area.

All content from Kiddle encyclopedia articles (including the article images and facts) can be freely used under Attribution-ShareAlike license, unless stated otherwise. Cite this article:
St Marys, Tasmania Facts for Kids. Kiddle Encyclopedia.