St Helens is the largest town on the north-east coast of Tasmania, Australia, on Georges Bay. It is known as the game fishing capital of Tasmania and is also renowned for its oysters (as are some other areas of Tasmania). It is located on the Tasman Highway, about 160 km east of Tasmania's second largest city, Launceston. In the early 2000s, the town was one of the fastest growing areas of Tasmania, and reached a population of 2049 at the 2006 census. St Helens is part of the Break O'Day Council, a council that includes the nearby town of Binalong Bay. A number of shops can be found in the town along Cecilia Street, such as a Supa IGA and Gallery Parnella.

St Helens was first used as a whaling base in the early 19th century. When tin was discovered in the surrounding area in the 1870s, St Helens became the shipping port for the mines. This was the first time a coach service had been introduced to the town; previous access had only been by sea. The town was named after St Helens, Isle of Wight. Today the town is a popular resort for fishing, swimming and other aquatic activities. Its economy is based largely on tourism, fishing and timber. 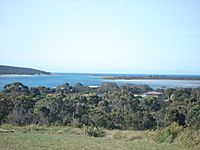 The first European to explore the St Helens area was Captain Tobias Furneaux who sailed up the coast in 1773. He named the southern point of Georges Bay, St Helens Point.

The first official land grant was provided in 1830 and in 1835 the small village was renamed St Helens. It would have continued to be an inconsequential port had not tin been discovered at Blue Tier in 1874. Suddenly the port, and the routes to the tin mines, were awash with miners. Over 1000 Chinese moved through the port. From 1874 until the turn of the century the tin mines prospered.

When the mines closed the miners moved to the coast and many of them settled in St Helens. Slowly the port changed so that today it has a major fishing fleet which is supported by boat building, ships chandlery and other ancillary activities. In recent times tourism, driven by fishing and the town's mild climate, has become important.

All content from Kiddle encyclopedia articles (including the article images and facts) can be freely used under Attribution-ShareAlike license, unless stated otherwise. Cite this article:
St Helens, Tasmania Facts for Kids. Kiddle Encyclopedia.