Scottsdale is a town in the north-east of Tasmania, Australia. It lies on the Tasman Highway, around 63 kilometres (39 mi) north-east of Launceston and 22 km (14 mi) south-east of the coastal town of Bridport. It is part of the Dorset Council.

The area was first surveyed in 1855 and was described as, "the best soil on the island ... well watered, with a mild climate" by surveyor James Scott, for whom the town is named. This rings true today as the town, as well as being the regional centre for other north-east towns, is a major agricultural centre.

Ellesmere Post Office opened on 29 November 1865 and was renamed Scottsdale in 1893.

Scottsdale is a relatively Anglo-Saxon community, with the largest groups of foreign-born locals being from the United Kingdom, New Zealand and Italy. 72% of the population identifies as Christian. The median age of the town is 36. (Figures from the 2001 census)

In the 2006 census, the most common industries of employment for persons aged 15 years and over usually resident in Scottsdale were Log Sawmilling and Timber Dressing (15.4%), School Education (5.0%) Road Freight Transport (5.0%), Supermarket and Grocery Stores (4.3%) and Forestry and Logging (4.3%).

Scottsdale voters showed their conservatism compared to other Tasmanian towns when they gave the Liberal candidate at the 2004 Federal election, Michael Ferguson, 61.72% of their vote on a two-party preferred basis.

The high point of the town is located in Mary Street where there is a large water storage tank.

Ellesmere is the original Scottsdale where the first settlement was built, located now on the northern outskirts of the town. 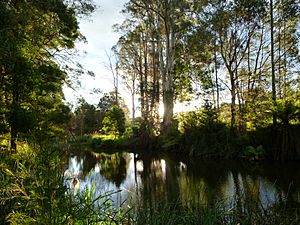 Northeast Park is a popular facility in the town, and provides seven days free camping, barbecues and coin-operated hot showers for those passing through the region. Northeast Park has had recent upgrades, with community support helping to improve the park.

Public Transport in the region is serviced by RD & FH Sainty North East Bus Service. The service runs several times per day delivering passengers and freight to local businesses. Also there is an early service primarily for students studying in Launceston leaving at 7:10 am and returning at 5:20 pm every school day.

In July 2006 Scottsdale, the heart of Tasmania's "north-east Bible belt", was given national coverage because local Exclusive Brethren members were named as having conducted an advertising smear against the Australian Greens political party.

There has been consternation and division in 2005 and 2006 in the local community and against the Dorset Council over the issue of the closure of William Street to through traffic and the blessing of Lilydale Road and Listers Lane as a trucking route. A new "version" of Listers Lane was built to link Lilydale Road to Bridport Road. Many local businesses protested against the closure of William Street, and today the new road sits unused because of safety reasons, a "white elephant" costing several million dollars. The road reopened in 2008.

Major activity is currently afoot around Scottsdale in the development of the tourist trail, "Trail of the Tin Dragon".

Scottsdale locals gain a sense of community by participating in activities related to the local primary and high schools, churches and sport. Australian rules football is very popular in the town and the Scottsdale Football Club had success in the Northern Tasmanian Football Association. Also popular are swimming, golf, hockey, bowls and basketball.

Students wishing to complete their Tasmanian Certificate of Education (TCE) are required to attend college in the city of Launceston.

7SD previously operated from studios in Scottsdale's King Street. It provided a community service by joining together locals over the large north-east Tasmania area by for example publishing cooking books filled with recipes by locals. There are no longer local radio broadcasts from Scottsdale itself. 7SD and SeaFM are both now retransmitted from Launceston.

All content from Kiddle encyclopedia articles (including the article images and facts) can be freely used under Attribution-ShareAlike license, unless stated otherwise. Cite this article:
Scottsdale, Tasmania Facts for Kids. Kiddle Encyclopedia.