Bridport is a small town on the north-east coast of Tasmania, Australia. It is part of the Dorset Council. At the 2011 census, Bridport had a population of 1,248.

Located on Anderson Bay, Bridport is a holiday location with the population increasing markedly in summer. It has beaches, swimming, sailing and other water sports. 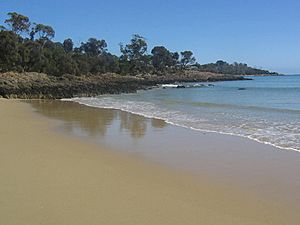 In 2004 a links golf course, Barnbougle Dunes, was established on sand dunes 3 km north-east of Bridport. This was soon ranked in the top 50 courses in the world and rising. A second links course called Lost Farm was built next to Barnbougle Dunes and opened in December 2010. Built to a similar high standard, this development established club facilities high on sand dunes for spectacular views of the beach and Anderson Bay.

A helicopter service began in 2008 transporting people between Launceston and Bridport mainly for golfers who fly in to Tasmania to play.

Commercial fishing operates from Bridport as well as sporting fishing from the rocks or small boats.

Streets in the northern half of Bridport have male person names and those in the southern half have female names.

Nearby towns include Scottsdale, Tomahawk and Bellingham.

All content from Kiddle encyclopedia articles (including the article images and facts) can be freely used under Attribution-ShareAlike license, unless stated otherwise. Cite this article:
Bridport, Tasmania Facts for Kids. Kiddle Encyclopedia.