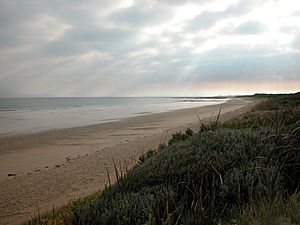 The township is largely made up of shacks used during the summer time. The permanent residence is about 25 people. In recent years the George Town Council has completed upgrade projects on many of the township's roads, including sealing works on the main Bellingham Road as well as base graveling on Gees Marsh Road, allowing better access to the central township and surrounding areas. 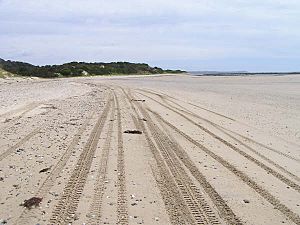 There is a camping ground, tennis court and small boat ramp within the central township, The Marine and Safety Board of Tasmania (MAST) recently announcing funding for a much-needed upgrade for the ramp. the nearby shoreline of the Pipers River can easily be accessed from the town, as well as large coastal beaches adjacent to Bass Strait.

Miller's Beach can be accessed by Four-wheel drive from Gees Marsh Road and marks the beginning of a designated 4wd route that traverses the beaches and sand dunes of Noland Bay and St. Albans Bay, before arriving at Briport. [1]

Originally called Pipers Heads, Bellingham was first used as a watch for sailing vessels that went up the Pipers River to Weymouth. The wharf at Weymouth was burnt down at the turn of the century, leaving a number burnt pilons in the river sand that remain to this day.

Further East from the main township, alongside the Little Pipers River, there was a town surveyed as Fordington that was, up until 20 years ago, a boom area. As the town's population decreased, the State Lands Department created controversy in ordering many off their land in the area, designating most of it either as uninhabitable crown land or privately owned property. On Christmas Day in 2001, a large tidal surge swept up the Little Pipers, the evidence of which can still be observed in large-scale vegetation and riverbank damage in the low-lying areas adjacent to the coast. Although no warning to the deserted river area now, there were at least two witnesses to the surge who were either present at the time of the surge or passed by the area on that day whilst headed along the beach.

Route C852 (Bellingham Road) enters from the south and runs through to the village in the north-west, where it ends.

All content from Kiddle encyclopedia articles (including the article images and facts) can be freely used under Attribution-ShareAlike license, unless stated otherwise. Cite this article:
Bellingham, Tasmania Facts for Kids. Kiddle Encyclopedia.