George Town (Palawa_kani: kinimathatakinta) is a large town in north-east Tasmania, on the eastern bank of the mouth of the Tamar River. The Australian Bureau of Statistics records the George Town Municipal Area had a population of 6,764 as of 30 June 2016.

It is the regional centre of the George Town Council local government area and is well served with a Regional Hospital, supermarkets, and infrastructure. 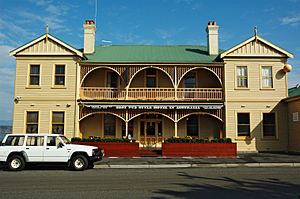 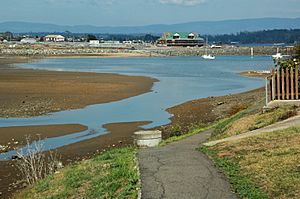 George Town, named for King George III is one of the older European settlements in Australia, first settled in 1804 by Colonel William Paterson two years before the nearby city of Launceston 50 kilometres to the South.

Gunns Limited had proposed a very large pulp mill to be built in the area in 2006, but the Tasmanian people were, and still are, divided on its merits due to environmental concerns.

Gunns Ltd entered receivership in 2013, with huge debts and the mill is considered unlikely to ever proceed, with the receivers selling the company assets.

"The Grove" Georgian home built in 1829 attracts many visitors, as does the 1805 convict built pilot station at Low Head.

George Town is also a popular seaside destination for swimming, surfing, and fishing and boating enthusiasts.

George Town is home to a Little Penguin colony at the nearby beach at Low Head.

The Bass and Flinders Centre has a collection of historical boats including a replica of the 1798 sloop Norfolk.

The Watch House in Macquarie St. built in 1843 was the town gaol (jail). The building was refurbished and reopened in 2004 as a gallery and local history museum. It features a scale model of the town as it was in the early nineteenth century.

George Town is home to a vibrant arts community. The Lighthouse Regional Arts group hold a yearly art show, have local and interstate travelling displays at the Watch House and have permanent displays of art at the Bass and Flinders centre, the Low Head pilot station and the Jim Mooney Gallery.

Some main events that happen annually in George Town include:

In 2007 Alinta built the Tamar Valley Power Station a 200 MW gas-fired power station in the vicinity of George Town creating 200 direct and 100 indirect jobs during construction, and generating electricity from 2009.

Nearby Bell Bay has an aluminium and manganese smelter, as well as the port.

Notable people from or who have lived in George Town include:

All content from Kiddle encyclopedia articles (including the article images and facts) can be freely used under Attribution-ShareAlike license, unless stated otherwise. Cite this article:
George Town, Tasmania Facts for Kids. Kiddle Encyclopedia.