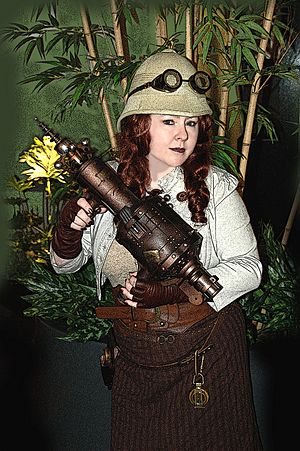 Steampunk is a style of fiction having to do with a semi-fictional world where old machinery from the Victorian 19th century is still being used. Technologies that were new or important to the Victorians, such as steam power, clockwork or electricity, are big themes in steampunk.

The fictional style has become an active 'scene' where steampunks dress in costume and attend meetings or conventions. This costume is a large part of the scene. Many steampunks spend lots of time sewing their own outfits, or collecting accessories such as hats and goggles. The Maker movement involves many people who are both Makers and steampunks. They make Contraptions, fanciful devices as either art or a pretended function. Some of these contraptions are as large as cars, buses or even a steam-powered mobile house.

Sometimes this aspect is expanded to include cultural ideas of the 19th and early 20th century, such as small items like clothing and accessories, or large objects such as locomotives (trains) or machines that haven't even been invented yet, like airplanes.

Sometimes steampunk is used in stories to give a rough, gritty feel. This is typical of American steampunk stories, where many stories are set around the Old West or the American Civil War.

British steampunk is a contrast to this. Instead it considers Victorian society as a more polite society and tries to re-create a world of politeness, etiquette and distinctions between classes.

Neither flavour of steampunk cares too much about historical accuracy. The purpose is to have fun, not to accurately re-enact a period of real history.

Steampunks are very fond of particular machines and these keep re-appearing as themes in fiction or in costume.

Goggles are one of the most popular pieces of steampunk costume. Part of "the story" for steampunks is their bravery in hazardous situations, either exploring remote and dangerous places, or experimenting in their laboratory. In both of these, goggles are essential protective equipment. Steampunk goggles often have telescopic lenses or swivelling lenses on posts that can be rotated in front of the eyes.

Hats are not often worn today, compared to the past, and so steampunks favour wearing them as an easy and distinctive piece of costume. Favourite hat styles are top hats, pith helmets and pickelhaubes.

These range from ordinary gloves with gears and other accessories sewn on to give them a more technical appearance all the way to highly detailed mechanical hands.

Ray guns with ornate gearwork or tubing are popular.

Victorian era accessories such as pocket watches, brass spyglasses, or walking sticks are also popular components of steampunk costumes. Some outfits include large tanks worn on the back.

Steampunk jewelry typically includes gears. The octopus is a popular theme, perhaps inspired by the attack of the cuttlefish on the Nautilus in the Jules Verne story 20,000 Leagues Under the Sea.

The word "steampunk" is made of the root words "steam" and "punk". This use of "punk" has nothing to do with the punk rock music of the mid-1970s.

A well-known science-fiction author William Gibson, wrote books in the early 1980s that created the "cyberpunk" style. Later he, and the writer Bruce Sterling, wrote one of the early steampunk novels The Difference Engine. This book was popular and readers looked for a term to describe this new style. They chose "steampunk", from "steam" and "cyberpunk".

An alternate story is that the term was coined by writer K.W. Jeter in a letter to Faren Miller at Locus magazine.

There are several related styles that have grown from steampunk. These usually have names ending in "-punk". The best known is "Dieselpunk", which is set in the 1930s. Like the Steampunk fondness for Victorian steam machines, Dieselpunks like the Modernist style of the 1930s, with polished aluminium aircraft and petrol or diesel engines.

Another variety is set in the American frontier during the late 19th century. The American 1960s television series Wild Wild West is a good example of this.

Paranormal steampunk includes legendary creatures such as werewolves or vampires and mixes horror with steampunk.

Works of fiction based in or on Steampunk

All content from Kiddle encyclopedia articles (including the article images and facts) can be freely used under Attribution-ShareAlike license, unless stated otherwise. Cite this article:
Steampunk Facts for Kids. Kiddle Encyclopedia.