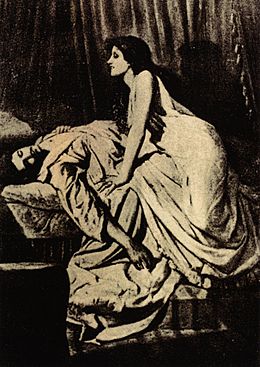 The Vampire, by Philip Burne-Jones, 1897

Vampires are monsters in legends and stories. The first vampire stories were told in Eastern Europe, but much of how modern people see vampires was created by Bram Stoker in the famous novel, Dracula. Few people believe that vampires are real, but they are still very popular in movies, television, and books.

All content from Kiddle encyclopedia articles (including the article images and facts) can be freely used under Attribution-ShareAlike license, unless stated otherwise. Cite this article:
Vampire Facts for Kids. Kiddle Encyclopedia.