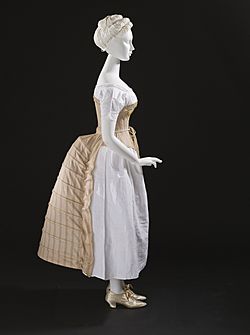 A bustle is a padded undergarment used to add fullness, or support the drapery, at the back of women's dresses in the mid-to-late 19th century. Bustles were worn under the skirt in the back, just below the waist, to keep the skirt from dragging. Heavy fabric tended to pull the back of a skirt down and flatten it. As a result a woman's petticoated or crinolined skirt would lose its shape during everyday wear (from merely sitting down or moving about).

A US patent illustration of a concept crinoline/bustle. 1867

As the fashion for crinolines wore on, their shape changed. Instead of the large bell-like silhouette previously in vogue, they began to flatten out at the front and sides, creating more fullness at the back of the skirts. One type of crinoline, the crinolette, created a shape very similar to the one produced by a bustle. The excess skirt fabric created by this alteration in shape was looped around to the back, again creating increased fullness

The bustle later developed into a feature of fashion on its own after the overskirt of the late 1860s was draped up toward the back and some kind of support was needed for the new draped shape. Fullness of some sort was still considered necessary to make the waist look smaller and the bustle eventually replaced the crinoline completely. The bustle was worn in different shapes for most of the 1870s and 1880s, with a short period of non-bustled, flat-backed dresses from 1878 to 1882.

In the early stages of the fashion for the bustle, the fullness to the back of the skirts was carried quite low and often fanned out to create a train. The transition from the voluminous crinoline enhanced skirts of the 1850s and 1860s can be seen in the loops and gathers of fabric and trimmings worn during this period. The bustle later evolved into a much more pronounced humped shape on the back of the skirt immediately below the waist, with the fabric of the skirts falling quite sharply to the floor, changing the shape of the silhouette. 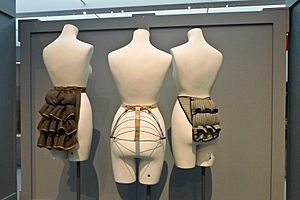 English bustle supports worn as undergarments, from 1875 to 1885. 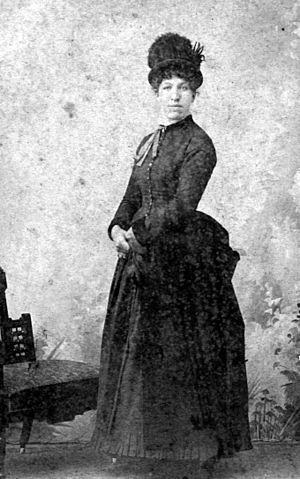 Woman wearing a dress with a bustle, USA, about 1890

The bustle reappeared in late 1881, and was exaggerated to become a major fashion feature in the mid and late 1880s, in 1885 reaching preposterous proportions to modern eyes, as used in the play Arms and the Man by George Bernard Shaw. The fashion for large bustles ended in 1889.

The bustle then survived into the 1890s and early 20th century, as a skirt support was still needed and the stylish shape dictated a curve in the back of the skirt to balance the curve of the bust in front. The bustle had completely disappeared by 1905, as the long corset of the early 20th century was now successful in shaping the body to protrude behind.

Bustles and bustle gowns are rarely worn in contemporary society. Notable exceptions occur in the realm of haute couture, bridal fashion and Lolita Fashion. A dress in the bustle style may be worn as a costume. For example, in 1993 Eiko Ishioka won an Academy Award for her costume designs from Bram Stoker's Dracula. The film features several extravagant bustle gowns created for female leads Winona Ryder and Sadie Frost. (though the film states it is 1897, a time when the large bustles depicted would have disappeared years ago. Films like "The Bostonians", "Topsy Turvy" or "Age of Innocence" depict a more realistic fashion)

All content from Kiddle encyclopedia articles (including the article images and facts) can be freely used under Attribution-ShareAlike license, unless stated otherwise. Cite this article:
Bustle Facts for Kids. Kiddle Encyclopedia.