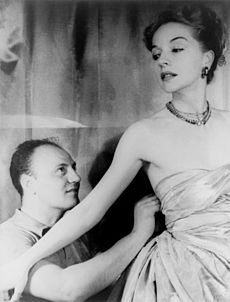 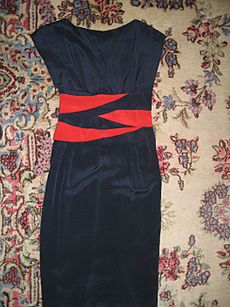 A simple haute couture evening gown designed by Marc Bohan for the House of Dior, Spring 1983 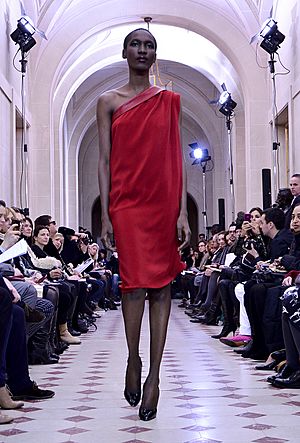 Haute couture (pronounced 'OHT koo-TOOR') is a French term for high fashion. It refers to the creation of exclusive custom-fitted clothing. The term refers to:

Haute couture is made to order for a specific customer. It is usually made from high-quality, expensive fabric and sewn with extreme attention to detail and finish by the most experienced and capable seamstresses, often using time-consuming, hand-executed techniques. Couture is a common abbreviation of haute couture.

In France, haute couture is une appellation juridiquement protégée (a legally protected name). It may only be used by firms which meet certain well-defined standards. However, the term is also used to describe all high-fashion custom-fitted clothing in other 'fashion capitals' such as Milan, London, New York, Tokyo and Madrid.

The couturier Charles Frederick Worth (13 October 1826–10 March 1895), is widely considered the father of haute couture as it is known today. Although born in Lincolnshire, England, Worth made his mark in the French fashion industry. He revolutionized how dressmaking was organised. Worth made it so the dressmaker became an artist: a fashion designer. He created one-of-a-kind designs to please his titled or rich customers. More importantly, he prepared designs which were shown on live models at the House of Worth. Clients selected a design, specified colours and fabrics, and had a version tailor-made in Worth's workshop. Worth combined individual tailoring with a standardization more characteristic of the ready-to-wear clothing industry, which was also developing during this period.

To earn the right to call itself a couture house and to use the term haute couture, members of the Chambre syndicale de la haute couture must follow these rules:

All content from Kiddle encyclopedia articles (including the article images and facts) can be freely used under Attribution-ShareAlike license, unless stated otherwise. Cite this article:
Haute couture Facts for Kids. Kiddle Encyclopedia.