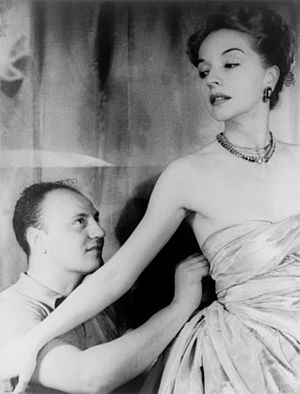 Pierre Alexandre Claudius Balmain, 18 May 1914 – 29 June 1982) was a French fashion designer. He was born in Saint-Jean-de-Maurienne, Savoie. He founded the fashion house Balmain. Known for sophistication and elegance, he once said that "dressmaking is the architecture of movement". He died in Paris.

All content from Kiddle encyclopedia articles (including the article images and facts) can be freely used under Attribution-ShareAlike license, unless stated otherwise. Cite this article:
Pierre Balmain Facts for Kids. Kiddle Encyclopedia.