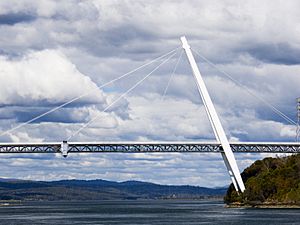 The Batman Bridge crosses the Tamar River in northern Tasmania, about 30 km north of Launceston. It was opened on 18 May 1968 by the Premier of Tasmania, Eric Reece. When it was built it was one of the first cable-stayed truss bridges in the world. It provides access between the north east and north west of Tasmania. It was named after John Batman, a Tasmanian pioneer and the founder of the city of Melbourne.

The bridge is built at the narrowest point on the Tamar River, at Whirlpool Reach. However, the east bank was found to be soft clay which would not support the bridge. The A frame tower on the west bank is built into the bedrock 70 ft (21 m) below the surface and supported by steel cables concreted into tunnels in the bedrock. The tower supports the whole weight of the river span of the bridge.

All content from Kiddle encyclopedia articles (including the article images and facts) can be freely used under Attribution-ShareAlike license, unless stated otherwise. Cite this article:
Batman Bridge Facts for Kids. Kiddle Encyclopedia.