Glenorchy is a business district and suburb in the northern part of greater Hobart, capital of the state of Tasmania, Australia. The land was originally used for agriculture (particularly orchards) but is now a largely suburban, working-class area. It is the seat of the local government area of the same name, the City of Glenorchy.

Glenorchy is home to many facilities of the northern suburbs. These include an outdoor swimming pool, a cinema, an Australian rules football oval and a football (soccer) ground (both part of the KGV Oval complex), a bowls club, and a public area called Tolosa Park. Glenorchy is also home to the Tasmanian Transport Museum. A major feature of the park is its open-air auditorium, primarily used for musical performances.

The main traffic route in and out of Glenorchy is the Main Road, which passes the area in a north-south direction.

Glenorchy is a physically large suburb, and some parts of it have been given alternate names: 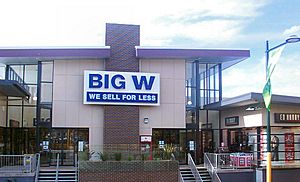 All content from Kiddle encyclopedia articles (including the article images and facts) can be freely used under Attribution-ShareAlike license, unless stated otherwise. Cite this article:
Glenorchy, Tasmania Facts for Kids. Kiddle Encyclopedia.