West Moonah is a residential suburb of Hobart, Tasmania, Australia. It is part of the City of Glenorchy local government area. At the 2011 Australian census the suburb recorded a population of 3,774. 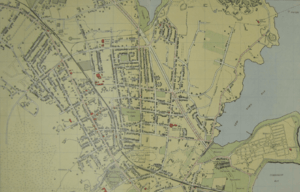 West Moonah and Moonah in 1954

West Moonah has two schools. Springfield Gardens Primary School is a public school and Hillard Christian School is private. There are also several parks, including the Jim Bacon Reserve with its recreational trail.

All content from Kiddle encyclopedia articles (including the article images and facts) can be freely used under Attribution-ShareAlike license, unless stated otherwise. Cite this article:
West Moonah, Tasmania Facts for Kids. Kiddle Encyclopedia.