Moonah is a suburb in the city of Hobart, Tasmania, Australia located approximately 5 km north of the central business district of Hobart, and lying directly north of the inner city suburb New Town. In the 2011 Australian census, the population of Moonah was 5,126. 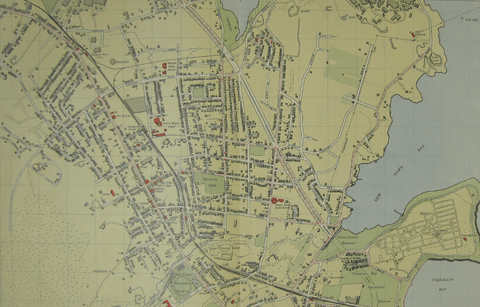 West Moonah and Moonah in 1954

Originally land given free to settlers along the banks of the New Town Rivulet, this area eventually became known as the suburbs of New Town and Moonah.

Moonah is known for its eclectic mix of Colonial, Victorian, Federation, and Art Deco residences, with many cottages and larger homes scattered throughout the suburb.

The key transport axis of the suburb is Main Road, which runs between Derwent Park to the north and New Town to the south. The Moonah shopping district is located between Florence Street and Amy Street, and includes vintage and designer clothing boutiques, antique stores, a bookstore, a Harris Scarfe department store, numerous cafes and restaurants, bakeries, a smallgood stores, specialist grocery stores, the offices of several members of State parliament, the Stable Art Gallery, banks, a newsagent, and a post office.

All content from Kiddle encyclopedia articles (including the article images and facts) can be freely used under Attribution-ShareAlike license, unless stated otherwise. Cite this article:
Moonah, Tasmania Facts for Kids. Kiddle Encyclopedia.