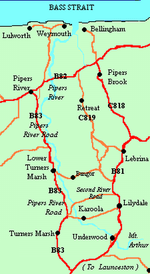 Lilydale, originally known as Upper Piper, is a small town in northern Tasmania, Australia. The town is 28 kilometres (17 mi) northeast of Launceston and is a part of the Launceston municipality. It is located near Mount Arthur. At the 2006 census, Lilydale had a population of 288. The town's notable attractions include the Lilydale Falls, two small waterfalls, Mount Arthur, and, along the main street, a series of telegraph poles painted with murals.

Origin of the name Lilydale

Speaking at the monthly meeting of the Lilydale council, the clerk stated that during the month he had been asked by scholars at the Lilydale area school the reason why the district was given the name Lilydale, the date the name was altered and who suggested the alteration.Lilydale was formerly known as Upper Piper and the council clerk said he could not supply the information so he wrote to Mr. LW Loewe of Launceston who is an authority on the early history of Lilydale. In his letter Mr. Loewe said the change of name was made in 1887 and the Tankerville Road Trust as the only public body in the district at that time was probably responsible. Mr. E Kowarzic was chairman of the road trust.

Mr. Loewe further stated the district was always famous for flowers and at anniversary services there was always a fine display of Christmas lilies in the churches so Mr. E Kowarzic made the remark that the town should be called Lilydale. This was opposed by Mr. John Somerville, Jacob Marx and LW Loewe who favoured 'Tankerville' which is an old English name. One objection made was that there was a Lilydale in Victoria and letters are miscarried. Although it is 67 years since the name was changed letters are frequently sent to the wrong town.

Upper Pipers River Post Office opened on 1 December 1873 and was renamed Lilydale in 1887.

More recently, the town has attracted attention due to the Lilydale Village Market, created as a result of mediation between parties in a 2008 environmental dispute.

Karoola is a small area located off Pipers River Road, about 6 km outside Lilydale town. Karoola means "fresh water" in the local aboriginal dialect. Facilities in the locality include a telephone box, an emergency fire shed, a Catholic church, a tennis court and a community hall. The local fire station is situated 5 km along Pipers River Road in Turners Marsh. There was once a general store but it was sold to a private buyer.

Underwood is a locality just outside Lilydale. The Pipers River flows through the area.

Hollybank Forest is a 140-hectare reserve located on the Pipers River, near Underwood, 5 km outside Lilydale. It was originally used to source timber for sawmills in Launceston. Because the land was unable to be farmed the area was taken over by Forestry Tasmania who have managed it since. There are a few short walks and a picnic area.

Turners Marsh is a locality on Pipers River Road, southwest of Lilydale and south of Lower Turners Marsh. Much of the area is bushland, with some small farms. Turners Marsh has a carting track.

Lilydale, Karoola and Turners Marsh are all situated on the branch railway from Launceston which opened to Scottsdale on 9 September 1889.

All content from Kiddle encyclopedia articles (including the article images and facts) can be freely used under Attribution-ShareAlike license, unless stated otherwise. Cite this article:
Lilydale, Tasmania Facts for Kids. Kiddle Encyclopedia.