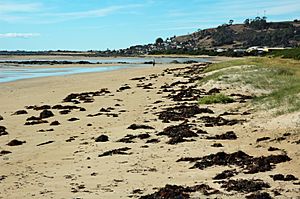 The beach at Somerset 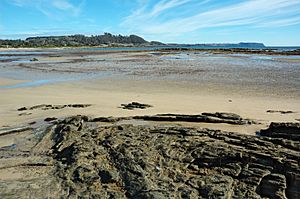 The beach at Somerset

Somerset is a small township to the west of Burnie, Tasmania, Australia, which shares its name with the County of Somerset, England, UK. Today the city of Burnie encompasses the entire Burnie-Somerset urban area; however, the town is part of the Waratah/Wynyard municipal area.

Somerset River Cam Post Office opened on 5 November 1864. It was renamed Somerset Cam around 1934 and Somerset in 1963.

Somerset is located on the estuary of the Cam River midway between the township of Wynyard and the city of Burnie. The Cam River is the borderline of where the Waratah-Wynyard Council meets the City of Burnie. A beach stretches along the full length of the Somerset coastline from the Cam River to the far western outskirts.

The only public transport in the area is Metro Tasmania which offers bus services from Wynyard to Ulverstone.

The Burnie Airport is located in the township of Wynyard, a 15-minute drive away.

There are a number of small businesses in Somerset with almost all along the main street.

Notable industries in Somerset include: Gunns Veneers, which is one of only three production facilities in Australasia. Gunns Veneers is Australasia’s largest producer of sliced veneers and the world’s largest producer of Eucalypt veneers. The Burnie branch of William Adams. William Adams is a CAT Rental Dealer as well as a servicing department. They specialize in the repairing, maintenance and modifications of heavy machinery used for mining, forestry and agriculture.

Somerset does not have a public high school or college.

There is one private school in Somerset, the Burnie branch of Australian Christian College, which is located on the outskirts of the town on Seabrook Road.

All content from Kiddle encyclopedia articles (including the article images and facts) can be freely used under Attribution-ShareAlike license, unless stated otherwise. Cite this article:
Somerset, Tasmania Facts for Kids. Kiddle Encyclopedia.