Kids Encyclopedia Facts
This page is about the geographic region and the locality. For the bioregion, see Tasmanian West. For the local government area, see West Coast Council.

The West Coast of Tasmania is mainly isolated rough country, associated with wilderness, mining and tourism. It served as the location of an early convict settlement in the early history of Van Diemen's Land, and contrasts sharply with the more developed and populous northern and eastern parts of the island state. 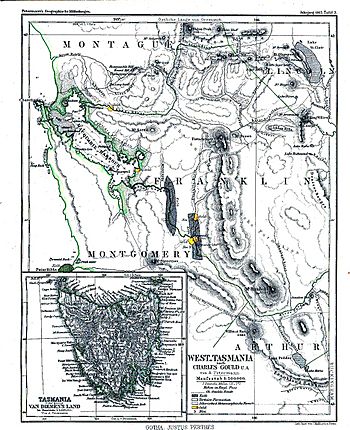 The west coast has a much cooler and wetter climate when compared to the east coast. Frequent low pressure systems hit the west coast causing heavy rain, snow, and ice. The West Coast Range blocks these systems from impacting the east, therefore making the West Coast a rain catchment with some areas receiving over 2,000 millimetres (79 in) of rain a year. In winter temperatures at sea level hover around 10 °C (50 °F), and when not raining, morning frost is common. The temperatures are much lower inland from the coast with maximums in winter often failing to surpass 0 °C (32 °F). Typically, the snow line in winter is around 900 metres (3000 ft), however sea level snow falls several times each winter as well. Summer is mild with maximum temperatures averaging between 17 °C (63 °F) and 21 °C (70 °F), though some days still fail to reach 10 °C (50 °F). Despite snowfall usually occurring in winter, it has been known to fall in the middle of summer.

Many outsiders have had difficulty understanding the isolation of the west coast, and the small communities, and the historical context to that isolation. Initially the only way in and out was by sea, and no serviceable roads to either the north or east existed until the 1930s (east) or the 1960s (north). Railways were the main land connection from the 1920s to the 1960s - though that connection was with the north coast, rather than the more populous southeast.

The treacherous conditions at Hell's Gates at the mouth of Macquarie Harbour, and ocean travel along the exposed western side of Tasmania have made marine travel a dangerous pastime even to the current day, despite modern technology. Memorial plaques to recent lost sailors on the wall at the northern edge of the Strahan wharf illustrate this.

The current airstrip is at Strahan, with the airstrip at Queenstown no longer a current registered landing ground. In the 1970s a regular service to the east coast was run by Airlines of Tasmania.

All transport services to the west coast are subject to interruption by severe weather. In addition to closures of air and marine service, the roads to the west coast may be blocked for days at a time by ice and snow during severe winter conditions.

The consequence of the isolation, and the ways that the communities coped with the difficulties, were little examined prior to the 1990s, except for parts of Tim Bowden's 1979 Radio Documentary "The West Coasters", and various references in Geoffrey Blainey's "The Peaks of Lyell" book and the important works of C.J. Binks and Kerry Pink.

Since the rise of tourism on the west coast, the Franklin Dam issue and the creation of the world heritage wilderness area, a steady number of small publications concerning the history and features of the region have been produced.

For a brief time in the early 20th century the west coast had population and political power on a parity with Hobart and Launceston. Following the demise of most of the Zeehan mines, the west coast population has either remained static, or declined relative to other parts of the island.

The environment is described with particular historical understanding by C.J. Binks in "Explorers of Western Tasmania" Chapter 2 - "A Sketch of the Western Country". See also West Coast Range

The convict era is introduced in articles about Macquarie Harbour Penal Station, Convicts on the West Coast of Tasmania, and Hell's Gates.

The reliance on the railways can be found in the separate article West Coast Tasmania Railways.

The mining history was captured first in Charles Whitham's Western Tasmania book - and Geoffrey Blainey's Peaks of Lyell and the books that have followed. See also the list at West Coast Tasmania Mines for a list that includes historical names and locations - many now long abandoned.

The vast tracts of forest (Huon Pine, among others) in the west coast region have been subject to fire, and exploitation - as well as significant areas now under conservation. The history of the West Coast Piners who utilised the Franklin River and Gordon River and their tributaries is a vital part of west coast history.

The legacy of the Hydro Electric Commission (The Hydro) on the west coast is a complex one, due to its sense in the 1940s to 1980s considering the west and south west regions as its 'last frontier' for the remaining catchments for its power development schemes.

As most of the European activity on the west coast (after the convict era) lies within the invention and use of the camera, most aspects of west coast history have been captured on film.

The Queen Victoria Museum and Art Gallery, and the State Library of Tasmania in Hobart are the main holdings of the record, while the late Eric Thomas's collection in the 'Galley Museum' in Queenstown is on a par with both.

Some examples of collections: -

Due to the rise of tourism in the 1990s - a considerable number of DVDs and videos are commercially available of the region - going into areas which had been inaccessible as recently as 30 or 40 years ago. Also tourists and hikers have gathered a considerable record of the region which regularly appears in either their own or generally accessible websites on the internet.

All content from Kiddle encyclopedia articles (including the article images and facts) can be freely used under Attribution-ShareAlike license, unless stated otherwise. Cite this article:
West Coast, Tasmania Facts for Kids. Kiddle Encyclopedia.