Strahan (pronounced "straw-n"), is a small town and former port on the west coast of Tasmania. It is now a significant locality for tourism in the region.

Strahan Harbour and Risby Cove form part of the north-east end of Long Bay on the northern end of Macquarie Harbour. At the 2016 census, Strahan had a population of 658.

Originally developed as a port of access for the mining settlements in the area, the town was known as Long Bay or Regatta Point until 1877, when it was formally named after the colony’s Governor, Sir George Cumine Strahan.

Strahan was a vital location for the timber industry that existed around Macquarie Harbour.

For a substantial part of the nineteenth century and early twentieth century it also was port for regular shipping of passengers and cargo. The Strahan Marine Board was an important authority dealing with the issues of the port and Macquarie Harbour up until the end of the twentieth century when it was absorbed into the Hobart Marine Board. 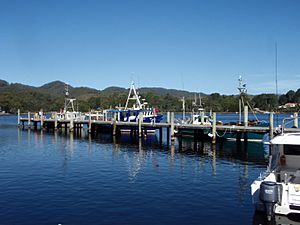 Historically Strahan has been a port to a small fishing fleet that braves the west coast conditions and Hell's Gates. It is the nearest inhabited locality to Cape Sorell and is literally the 'gateway' to the south-west wilderness - as boats, planes and helicopters utilise Strahan as their base when travelling into the region.

The Huon Pine industry that utilised stands around the harbour and up the tributary rivers - including King River, the Franklin River and the Gordon River.

Strahan is the location of the only all weather commercial airport in Western Tasmania, Strahan Airport. Also located at the airport is the Automatic Weather Station, an important western Tasmania weather observation point.

Strahan is the base for boat trips to Sarah Island, the notorious penal settlement that garnered the reputation as the harshest penal settlement in the Australian colonies, and the lower Gordon River.

Strahan is an access point to the Franklin-Gordon Wild Rivers National Park, which was declared part of the Tasmanian Wilderness World Heritage Area in 1982. For several years Strahan became the focus of a conservation campaign opposed to the proposed Franklin-below-Gordon Dam.

It is the home of the Round Earth Theatre Company, which conducts explanatory tours of Sarah Island and also has produced a daily enactment/play about Sarah Island, The Ship That Never Was, which has exceeded 5000 performances and is Australia's longest running play.

All content from Kiddle encyclopedia articles (including the article images and facts) can be freely used under Attribution-ShareAlike license, unless stated otherwise. Cite this article:
Strahan, Tasmania Facts for Kids. Kiddle Encyclopedia.