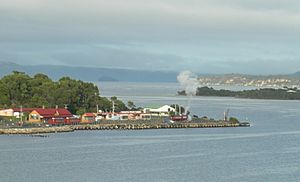 Regatta Point is the location of a port and rail terminus on Macquarie Harbour (West Coast, Tasmania).

Most shipping through the notorious Hells Gates is now the fishing fleet.

The last sea-based delivery of explosives for the Mount Lyell company occurred as late as 1976.

It was the port and terminus of the Mount Lyell Mining and Railway Company railway line from Queenstown.

When fully operational prior to closure in the 1960s, it was the location of the transfer of Mount Lyell materials to ships.

Regatta Point was the location of the connection between the Mount Lyell private railway and the government railway line which passed through Strahan on the way to Zeehan, when that line was operational. It was possible to utilise passenger services from Queenstown to Burnie, using the Mount Lyell Line, the government line to Zeehan, and the Emu Bay Railway line to Burnie.

It currently the terminus for the rebuilt West Coast Wilderness Railway. The remaining station building at Regatta Point has been restored for the new service, having lain at risk from the 1960s to the 1990s.

Outside of Macquarie Harbour - on the north coast of Tasmania - Burnie or the south east Hobart - smaller anchorages exist in between - but are either facility free Port Davey or dangerous Trial Harbour.

All content from Kiddle encyclopedia articles (including the article images and facts) can be freely used under Attribution-ShareAlike license, unless stated otherwise. Cite this article:
Regatta Point, Tasmania Facts for Kids. Kiddle Encyclopedia.