Queenstown's history has long been tied to the mining industry. This mountainous area was first explored in 1862. It was long after that when alluvial gold was discovered at Mount Lyell, prompting the formation of the Mount Lyell Gold Mining Company in 1881. In 1892, the mine began searching for copper. The final name of the Mount Lyell company was the Mount Lyell Mining and Railway Company.

In the 1900s, Queenstown was the centre of the Mount Lyell mining district and had numerous smelting works, brick-works, and sawmills. The area at the time was finely wooded. The population in 1900 was 5051; the district, 10,451.

The town was the base of the Queenstown council up until amalgamation with other west coast councils in the 1990s. The town in its heyday had a collection of hotels, churches and schools that have all significantly reduced since the demise of the Mount Lyell company.

The town was the base of the Organisation for Tasmanian Development started in 1982.

There was a brief boom in prosperity in the 1980s, with the building of several nearby dams by the Hydro. The Darwin and Crotty dams that comprise Lake Burbury (a popular fishing and recreation venue) were built during this period. These followed the cancellation of the Gordon-below-Franklin Dam in 1983 after strong campaigning by environmentalists in the 'No Dams' campaign. 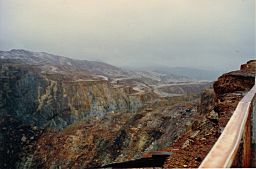 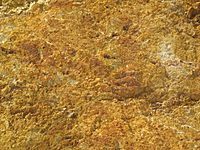 A close-up shot of rock in the mountains surrounding Queenstown

Owing to a combination of tree removal for use in the smelters and the smelter fumes (for about 40 years), and the heavy annual rainfall, the erosion of the shallow horizon topsoil back to the harder rock profile contributed to the stark state of the mountains for many decades.

Typical of the successions that occur in fire affected areas in Western Tasmania, the low shrubbery that has revegetated adjacent to hillside creeks is a very early stage of a long recovery for the ecology of the region.

Some concern by local residents in the 1980s, and since, that the low-level succession of plants might affect the stark 'moonscape' appearance of the southern parts of Mount Lyell, and northern Mount Owen. Although there are still large areas incapable of sustaining regrowth due to the acute slopes and lack of soil formation, the rate of vegetation recovery will render the mythologies arising from the appearance as only partial truths in time.

The Queen River was for most of the history of the Mount Lyell company the recipient of mining effluent and the Queenstown sewage - which then continued into the King River and consequently the Macquarie Harbour.

The Mount Lyell Remediation and Research and Demonstration Program scheme has since removed the direct flowing mining waste and local waste from the rivers. 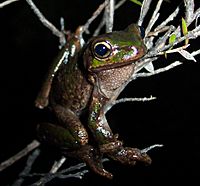 A Tasmanian Tree Frog from Queenstown

Today, the town and district attracts significant numbers of tourists, on either organised tours or the hire car 'circuit' around Tasmania. Some features continue to fascinate tourists, either the mountains, the slag heap or the gravel football ground. There are significant opportunities to catch glimpses of the town's past at the local museum, and simply by driving up Orr Street, the old main street now with closed pubs and the dominant Post Office tower.

The mining operation at the original Mount Lyell mine continues, with Copper Mines of Tasmania operating between 1995 and 1999 independently, after which it became part of an Indian company group - and its concentrates are shipped to India for processing.

Exploration continues within the West Coast region for further economic mineral deposits, and due to the complexity of the geology, there is always the possibility that new mines will open: the Henty Gold Mine is a good example as it commenced operation in the 1990s.

Queenstown is the terminus of the West Coast Wilderness Railway, which travels southwards alongside the Queen River, and then along the northern slopes of the King River to the port of Strahan in Macquarie Harbour.

The Queenstown Heritage and Arts Festival was the first name of a biennial festival that celebrates Queenstowns history.

In 2016 the festival has been renamed, and is now the Unconformity Festival

Queenstown has a very wet oceanic climate, and is one of the wettest locations in Tasmania with an annual average rainfall of 2408.2 mm (94.8 in), spread throughout the year. Summer temperatures can occasionally rise above 30 °C while winter minimums often drop below freezing. Occasional winter snowfalls have also been recorded. Queenstown is very cloudy, getting only 29.0 days of clear skies annually.

The median weekly personal income for people aged 15 years and over in Queenstown was $413 while the median weekly incomes for families and households were $1,143 and $821 respectively.

All content from Kiddle encyclopedia articles (including the article images and facts) can be freely used under Attribution-ShareAlike license, unless stated otherwise. Cite this article:
Queenstown, Tasmania Facts for Kids. Kiddle Encyclopedia.