Sandy Bay is a suburb of the city of Hobart, Tasmania, Australia, located immediately south of the central business district, and adjoins the suburb of Battery Point. Sandy Bay is bounded on the east by the Derwent River, and has several beaches along the shore, the main beaches with public access are Nutgrove Beach and Long Beach.

The suburb has many large homes, and is known as one of the city's prestigious areas. In the more southern areas of Sandy Bay, close to the water and also high on the slopes of Mt Nelson, are some of Tasmania's most expensive real estate. It is also the site of the Hobart campus of the University of Tasmania, and the private schools, Fahan School, The Hutchins School, and Mount Carmel College, Sandy Bay. There is considerable diversity within the suburb. The area surrounding the University of Tasmania is home to considerable student accommodation.

Sandy Bay is accessible from the city via Sandy Bay Road, which runs from Davey Street in the city all the way to the Kingborough municipal boundary at Taroona where it becomes the Channel Highway. Before the construction of the Southern Outlet, the road was the primary route to and from Kingston. The higher parts of Sandy Bay are accessible via Regent Street, which bypasses the main shopping district and goes through the University to Churchill Avenue and Lower Sandy Bay. 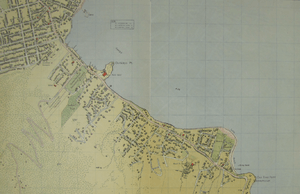 Most of the land at Sandy Bay was granted to Norfolk Islanders when the colonial authorities forced them to relocate to Van Diemen's Land in 1808.

The suburb's long sandy beach was one of the first venues for horseracing in Tasmania's early days. The tides had to be considered when scheduling the races to ensure there was sufficient space available. The races attracted large crowds and there was a lot of rash betting, loud shouting and uninhibited consumption of refreshments.

The Queenborough Road Trust was initiated in 1861. The Trust was created under the Cross and Bye Roads Act 1852 (15 Vict No.8.), proposed on the 24 Nov 1860, and held its first meeting on 22 Jan 1861. Its purpose was to construct, maintain and regulate cross and bye roads in the Queenborough Road District.

Sandy Bay residents had a median age of 38, compared to the Hobart median of 39. Median individual incomes in Sandy Bay were above average for the region—$511 per week compared with $455 per week; and 23.74% had incomes above $1,000 per week, compared with 15.50% across the Greater Hobart region. Industry sectors in which Sandy Bay residents worked were comparable with those in Hobart generally, with the largest proportions working in health care (17.67%), education (15.77%), retail (13.84%), hospitality (11.91%), public administration (9.66%) and professional, scientific and technical services (7.19%).

There is considerable diversity within the suburb. One of Sandy Bay's census collection districts (CCDs), based around the University of Tasmania and representing 1,131 people or 10% of the population, has a median age of 23 and an average income of $218, with almost three-quarters of the population in some form of education. Over 20% of the district's population is from Malaysia or China, compared to 5.7% in the suburb generally. At the other end of the scale, 59% of the suburb's population live in CCDs with median incomes above $500, some significantly above this, especially in the Lower Sandy Bay district.

The most common religious affiliations in descending order in the 2006 census were Anglican, no religion, Roman Catholic, Uniting and Buddhism. Parishes for the Anglican and Catholic churches have existed in the suburb since 1922 and 1934 respectively.

All content from Kiddle encyclopedia articles (including the article images and facts) can be freely used under Attribution-ShareAlike license, unless stated otherwise. Cite this article:
Sandy Bay, Tasmania Facts for Kids. Kiddle Encyclopedia.