Battery Point is a suburb of the city of Hobart, Tasmania, Australia. It is immediately south of the central business district. It is in the local government area of City of Hobart.

Battery Point is named after the battery of guns which were established on the point in 1818 as part of the Hobart coastal defences. The battery was situated on the site of today's Princes Park. The guns were used to fire salutes on ceremonial occasions but, thankfully, were never called upon to repel an invasion. The battery was decommissioned after an 1878 review of Hobart's defences found that its location would tend to draw an enemy's fire onto the surrounding residential neighbourhood. The site was subsequently handed over to the Hobart City Council as a place of recreation and amusement. When the Council carried out works to beautify the park in 1934, they discovered underground tunnels which had served as a magazine for the original battery.

The area is generally known as one of the city's more prestigious suburbs, with many large and extravagant homes and apartment blocks. It adjoins the waterfront Salamanca area as well as the nearby prestigious suburb of Sandy Bay. 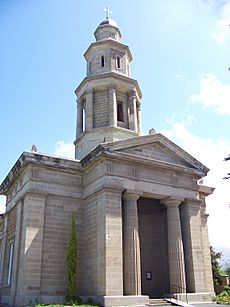 Battery Point has a large number of historic houses dating from the first European settlement of 'Hobart Town'. Probably the most significant is Arthur Circus with its cottages, mostly originally constructed for the officers of the garrison. Arthur Circus is the only circus in Australia.

Battery Point is accessible via Hampden Road, which runs from Sandy Bay Road from the edge of the city. 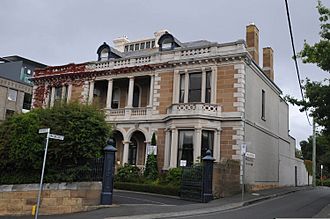 The hotel "Lenna of Hobart" on McGregor Street.

Battery Point residents have been the centre of controversy in recent years, demanding noise restrictions and other measures aimed at safeguarding a sheltered lifestyle.

Hollywood film actor Errol Flynn was born in Battery Point at the Queen Alexandra Hospital in 1909.

All content from Kiddle encyclopedia articles (including the article images and facts) can be freely used under Attribution-ShareAlike license, unless stated otherwise. Cite this article:
Battery Point, Tasmania Facts for Kids. Kiddle Encyclopedia.