Taroona (an Aboriginal word meaning sea-shell, specifically that of a 'Chiton') is a major residential suburb approximately 15 minutes drive from the centre of Hobart, Tasmania on the scenic route between Hobart and Kingston. Although on the edges of the City of Hobart, Taroona is actually part of the municipality of Kingborough.

The traditional owners of the lands now known as Taroona were the Aboriginal people of the Derwent estuary known as the Mouheneener people. Relatively little is known about the indigenous people's use of these lands, although some shell middens are said to have been found along the shorelines.

This district was originally known as Crayfish Point and the diaries of Robert Knopwood contain reference to expeditions to catch crayfish there.

The first European settlement at Taroona took place in the early 19th century, when land was granted to settlers who had relocated from Norfolk Island. For the remainder of that century, the area was largely used for farming, and was sparsely populated.

In the mid 1890s, Clarendon James Cox Lord purchased an 18 acre property which he called Taroona, after the aboriginal word for sea shell. Lord built himself a pretty homestead and also established tea rooms where visitors could indulge in delicacies such as strawberries and cream while overlooking the River Derwent, Hobart.

In the first half of the 20th century, more large and elegant residences were built, as well as beach shacks and cottages which were used for seaside holidays by the residents of Hobart. Taroona Post Office opened on 2 August 1906.

On the foreshore above Taroona Beach there is the grave of a young sailor, Joseph Batchelor, who died on the Sailing Ship Venus in the Derwent Estuary in 1810, and was buried ashore on 28 January 1810. It is reputed to be the oldest European grave in Tasmania, and it is a declared Historical site.

After WWII, significant subdivision of Taroona was undertaken, and the suburb's population rapidly expanded. Having been developed mainly in the "era of the automobile", Taroona was from the beginning a commuter suburb, and it has a notable absence of commercial or retail premises, many of the early retail enterprises having lost the battle with larger supermarkets elsewhere. 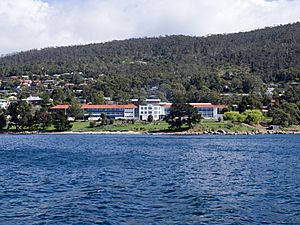 In 1958 a public High School was established on a large parcel of land on the Channel Highway central to the suburb, and with a frontage on to the foreshore of the Derwent River.

Taroona High School and Taroona Primary school are completely separate educational institutions, although they do share one oval.

Originally the high school catered for grades 7 to 11, but with the establishment of the separate Matriculation College system in 1962 the grade 11 students were transferred to the Hobart Matriculation College. At its maximum the enrolments at Taroona High School were about 1200 in the 1960s, with students travelling from Ferntree, South Hobart, Sandy Bay, Battery Point, Kingston, Blackmans Bay, and several centres further south.

There are now approximately 700 students in the high school, now only drawing students from the southern suburbs of Hobart. The current principal is John O'Rourke.

In February 1967, southern Tasmania was engulfed in the most vicious wildfires on record, resulting in many deaths. Taroona was the closest suburb to the city of Hobart to take the full brunt of the fires, which swept across the suburb in the mid afternoon, wreaking havoc, and destroying many homes. Children and residents fled to the river, and many people's survival was due to the refuge the safe waters provided. 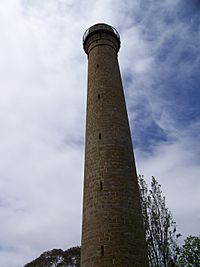 Situated on the Channel Highway just south of Taroona is one of the State's most unusual historic buildings, the Shot Tower. The Shot Tower is a 48 m (157 ft) tall, 10 m (32 ft) in diameter circular sandstone tower constructed by Joseph Moir in 1870 from locally quarried sandstone blocks. Lead shot was made by dropping molten lead through a sieve at the top of the tower and by the time it hit the water at the bottom it was cold and spherical in shape. A climb up the 259 steps to the top of the tower gives a wonderful view of the Derwent Estuary.

Just before reaching Taroona is the Truganini Reserve, named after the woman cited (with some contention) as the last surviving "full-blooded" Tasmanian aboriginal. A steep track leads from the reserve through forest up the side of Mount Nelson to the semaphore station at the summit that offers superb views over the Derwent River. The return walk takes around an hour and a half.

All content from Kiddle encyclopedia articles (including the article images and facts) can be freely used under Attribution-ShareAlike license, unless stated otherwise. Cite this article:
Taroona Facts for Kids. Kiddle Encyclopedia.