Bridgewater, Tasmania, is a suburb in Tasmania's south-east. Located approximately 19 km from the Hobart CBD, it is part of the northern suburbs area of Greater Hobart.

Bridgewater commonly has a bad reputation for its low social class and is noted as a disadvantaged area. Much of this is due to the mass of public housing, mainly built in the 1970s as part of a public housing project that was operating from 1944 to 1989. 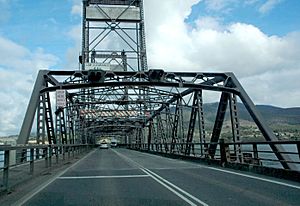 Bridgewater is situated on the eastern shore of the Derwent River. It is a suburb of the local government area of the Municipality of Brighton. From a transport perspective, Bridgewater is one of the first suburbs encountered by visitors traveling from the state's north via the Midland Highway and the Brighton Bypass. The suburb connects to the western shore via the Bridgewater Bridge and Causeway. Bridgewater was also once home to the train station, which was used by commuters for travel into the city.

Since 2011 Bridgewater has been the home to soccer club Derwent United FC at Weily Park.

All content from Kiddle encyclopedia articles (including the article images and facts) can be freely used under Attribution-ShareAlike license, unless stated otherwise. Cite this article:
Bridgewater, Tasmania Facts for Kids. Kiddle Encyclopedia.