Ulverstone is a town on the northern coast of Tasmania, Australia on the mouth of the Leven River, on Bass Strait. It is on the Bass Highway, 21 kilometres (13 mi) west of Devonport and 12 kilometres (7 mi) east of Penguin.

At June 2015 Ulverstone had an estimated urban population of 14,726, being the fifth largest town or city in Tasmania. The town is a part of the municipality of the Central Coast Council which also includes Penguin, Turners Beach, Leith, Gawler and surrounds, and Forth. 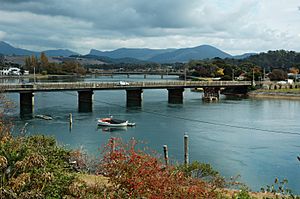 The town area was first settled by Europeans in 1848, when Andrew Risby, his wife Louisa and their five young children arrived to settle and develop farmland from what was mostly a thickly forested wilderness.

Andrew & Louisa arrived in Adelaide, South Australia in 1839 as a newly married couple from their ancestral town of Horsley, Gloucestershire in England. The first of their 5 children were born in Adelaide. Soon after the birth of their 2nd child they moved to Tasmania. In 1841 they arrived at the Forth River where a young 19-year-old James Fenton had pioneered just prior to their arrival. After clearing land and subsistence farming for a few years, they were evicted from their "patch" after a land dispute with a wealthy speculator and moved westward. The district was, at that time, known as 'the Leven' and recognised as a good source of quality timber with a similar climate to England. When their 5th child, Andrew Risby jnr. was just 2 years old the Risby family moved and settled on a patch of land known as The Rises, at the south-eastern perimeter of the present day Ulverstone town boundary where they farmed for many years. Descendants of this pioneering family still live in the district.

During the 1850s, the district received a few new settlers but was also frequented by transient timber getters. The timber found ready markets in Melbourne, which desperately required good quality split timber during the Victorian gold rush. Until June 1854, land releases in the district were often purchased under 'pre-emptive rights legislation' by distant purchasers whose intention was to keep the land for later sale at an increased price. With the repeal of that legislation, the conditions for settlers to take up residence improved.

Reliable rainfall and generally good quality soils favoured the development of agricultural pursuits. The early pioneers of the district struggled against great odds to secure their sustenance and ultimately develop an income from sale of their produce.

Ulverstone grew quite quickly during the 1890s.

The name Ulverstone is first known to have been used in 1854 when Hugh Ross McKay opened the Ulverstone store.

Ulverstone was declared a town on 22 February 1861 by Governor H.E. Fox-Young.

The town has become a centralised location between the north-west coast's two cities, Burnie and Devonport. It is named after Ulverston in England and which also sits at the estuary of a river called Leven. n.b. Ulverston, U.K. was spelled Ulverstone until late in the 19th Century

From 1915 until 1955, a branch railway ran from Ulverstone to Nietta, mostly carrying timber for the Burnie Pulp Mill.

There is rich farming land in this part of Tasmania, which makes it attractive and prosperous, and this stretch of the coast attracts increasing numbers of retirees. 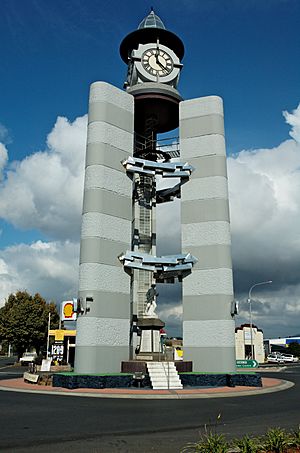 Ulverstone is being redeveloped to increase tourism. The Central Coast Council, together with the local Chamber of Commerce, have various projects under way to facilitate the plans.

In 2010, Ulverstone opened their new Basketball Stadium, the Schweppes Arena. The arena holds around 1,100 people, cost $5.5 million to build and was completed just behind schedule. it overlooks the Leven River and is situated just behind the former stadium.

In 2011, the Leven Bridge had been replaced by a new bridge constructed by local engineering firm VEC Civil Engineering. The new design was costed at approximately $6.5 million, with the Department of Infrastructure, Energy and Resources and the Central Coast Council funding the project. The walking track between Turners Beach and Ulverstone was completed as it was open in June 2011.

In 2012, The Wharf Precinct redevelopment was completed as it opened on the 17th November.

All content from Kiddle encyclopedia articles (including the article images and facts) can be freely used under Attribution-ShareAlike license, unless stated otherwise. Cite this article:
Ulverstone, Tasmania Facts for Kids. Kiddle Encyclopedia.