Ulverston is a market town and a civil parish in the South Lakeland district of Cumbria, England. In the 2001 census the parish had a population of 11,524, increasing at the 2011 census to 11,678. Historically in Lancashire, it lies a few miles south of the Lake District National Park and just north-west of Morecambe Bay, within the Furness Peninsula. Lancaster is 51 miles (82 km) to the east, Barrow-in-Furness 8 miles (13 km) to the south-west and Kendal 33 miles (53 km) to the north-east.

Ulverston is a comparatively large civil parish. It is bounded in the east by the Leven estuary, Crake, Coniston Water and Yewdale Beck. To the west the boundary follows a chain of hills, and beyond that lie the towns of Kirkby-in-Furness and Askam and Ireleth. To the south is relatively low land, but it rises quickly. In the north are hills such as Coniston Old Man. The settlements of the parish are mainly concentrated in the eastern part.

On 28 April 2009, Ulverston was near the epicentre of an earthquake measuring 3.7 on the Richter magnitude scale. Tremors were felt across south Cumbria and parts of north Lancashire at 11.22 BST, although virtually no damage was caused by them. A spokesman for the British Geological Survey said that earthquakes of around that magnitude occur roughly once a year in Britain. It was the largest seismic event in the region since a magnitude 4.4 earthquake struck Lancaster in 1835. 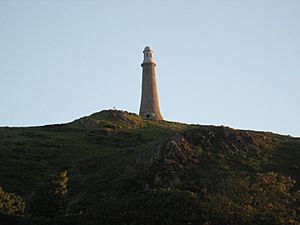 Hoad Hill and the replica of the Eddystone Lighthouse

The name Ulverston, first recorded in the Domesday Book (1086) as Ulurestun, is derived from two elements: the first is either the Old Norse personal name Úlfarr, or the Old English Wulfhere; the second element is the Old English tūn, meaning "farmstead" or "village". The personal names Úlfarr and Wulfhere both translate roughly as "wolf warrior" or "wolf army", which explains the presence of a wolf on the town's coat of arms. The loss of the 'W' in Wulfhere can be attributed to the historic Scandinavian influence in the region. Locally, the town has traditionally been known as Oostan. Other variations of the name recorded throughout history include Oluestonam (1127), and Uluereston (1189).

The town's market charter was granted in 1280 by Edward I. This was for a market every Thursday; modern Ulverston keeps its old market town appearance, and market days are now held on both Thursdays and Saturdays. The charter also allowed for all public houses to open from 10:30 am until 11:00 pm irrespective of any other statute on the books. During the summer months the Saturday market day is themed with craft stalls, charity stalls and locally produced wares on "Made in Cumbria" stalls. 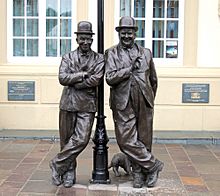 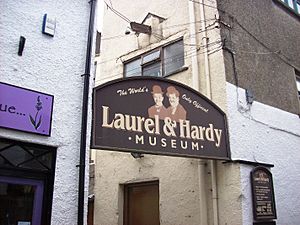 Historically, the ancient parish included several other chapelries or townships which later became separate civil parishes: Blawith, Church Coniston, Egton with Newland, Lowick, Mansriggs, Osmotherley, Subberthwaite and Torver. From 1894 to 1974 the town constituted an urban district in the administrative county of Lancashire. It became a successor parish in the Cumbria district of South Lakeland under the Local Government Act 1972.

Over the years the town has been the birthplace of several famous people. Sir John Barrow, born at Dragley Beck, Ulverston, was the Admiralty's Second Secretary: a much more important position than First Secretary. A monument to him—a replica of the third Eddystone Lighthouse—stands on Hoad Hill overlooking the town. Famous Ulverstonians include Norman Birkett, who represented Britain at the Nuremberg Trials; Maude Green, the mother of Rock and Roll music legend, Bill Haley; Norman Gifford, an England test cricketer; Francis Arthur Jefferson, a soldier awarded with the Victoria Cross; and comedian Stan Laurel, of Laurel and Hardy fame. The Laurel & Hardy Museum is situated in Ulverston, and in 2009 a statue of the duo was unveiled by comedian Ken Dodd, outside Coronation Hall in the town centre. One of Ulverston's lesser known sons is the late Bryan Martin, senior BBC Radio 4 newsreader and presenter of the '70s and '80s, who announced on the Today programme the death of Elvis Presley in 1977 and broke the news of the Iranian Embassy siege in 1980. He appeared in The News Quiz, occasionally introduced The Goon Show, and read the spoof "news bulletin" which always featured in the middle of the comedy The Men from the Ministry.

Ulverston railway station, a short walk from the town centre, lies on the Furness Line between Barrow-in-Furness and Lancaster, which leads on to Manchester Airport. Some trains continue along the Cumbrian Coast line to Carlisle.

Ulverston is twinned with the town of Albert in France.

Ulverston calls itself a 'festival town' in reference to the many and varied festivals which take place in Ulverston over the course of the year. The most renowned of these is the Lantern Festival, which involves hundreds of local residents creating lanterns out of willow and tissue paper and parading them throughout the town in winding rivers of light. The annual event culminates in a lively display of theatrical performance and fireworks in Ford Park, and was organised entirely by the community themselves for the first time in 2008.

Other popular festivals include: 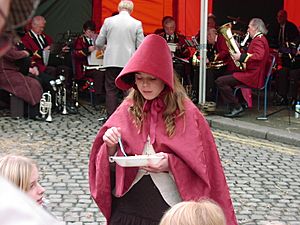 The Dickensian Festival, held the final weekend of November, sees a range of Christmas stalls and attractions visit Ulverston. People often dress up for the occasion in Victorian attire, as seen in this photo.

Despite being titled The Royal Norwegian Honorary Consulate in Barrow-in-Furness, one of the numerous consulates of Norway is actually located on the outskirts of Ulverston.

The town of Ulverstone in Tasmania, Australia is named after Ulverston and is similarly built at the mouth of a Leven River.

Ulverston Rangers association football team has existed since 1945. It currently plays in the West Lancashire Football League and the Furness Football League.

The town's two field hockey clubs, South Lakes and Ulverston, are based at Ulverston Leisure Centre. The town regularly has events run by Lakeland Orienteering Club. A parkrun event has been held every Saturday at Ford Park since 2018. 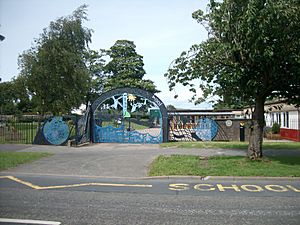 All content from Kiddle encyclopedia articles (including the article images and facts) can be freely used under Attribution-ShareAlike license, unless stated otherwise. Cite this article:
Ulverston Facts for Kids. Kiddle Encyclopedia.