Richmond is a town in Tasmania about 25 km north-east of Hobart, in the Coal River region, between the Midland Highway and Tasman Highway. At the 2006 census, Richmond had a population of 880. 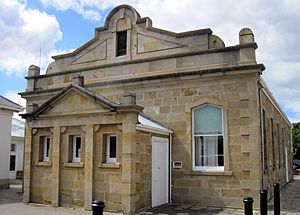 Richmond's most famous landmark is the Richmond Bridge, built in 1823 to 1825, around the time of the town's first settlement. It is Australia's oldest bridge still in use.

The town was initially part of the route between Hobart and Port Arthur until the Sorell Causeway was constructed in 1872.

Present-day Richmond is best known as being preserved as it was at that time. It is a vibrant tourist town, with many of the sandstone structures still standing.

Richmond Post Office opened on 1 June 1832. Richmond bridge was built in 1823 and is known as the largest stone span bridge in Australia.

Some notable tourist attractions in Richmond are the Richmond Bridge, the Richmond Gaol, Zoodoo Wildlife Park, a model of Old Hobart Town in the 1800s, and numerous old and heritage-listed buildings and parks.

All content from Kiddle encyclopedia articles (including the article images and facts) can be freely used under Attribution-ShareAlike license, unless stated otherwise. Cite this article:
Richmond, Tasmania Facts for Kids. Kiddle Encyclopedia.