The Richmond Bridge is a historic bridge in Richmond, 25 km (16 mi) north of Hobart in Tasmania, Australia. It is the oldest bridge still in use in Australia.

The foundation stone for the Richmond Bridge was laid on 11 December 1823 and the bridge was built by convicts. It was completed in 1825. The bridge was originally named Bigge's Bridge after Royal Commissioner, John Thomas Bigge, who recognised the need for the bridge in 1820.

The plaque on Richmond Bridge 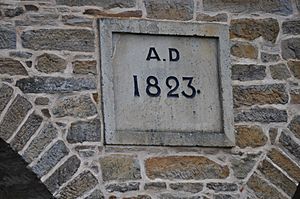 The stone set in the bridge showing construction started in 1823. 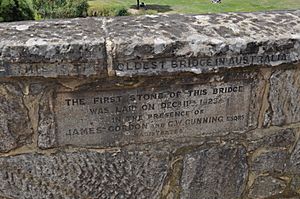 Another historic marker set into the bridge

In 2005, the bridge was recognised as an outstanding historic place and added to the Australian National Heritage List.

In 1832 a guard from the Richmond Gaol was murdered at Richmond bridge. George Grover's work including flogging (whipping) the prisoners. He was hated by the convicts. He died after being pushed off the edge of Richmond Bridge. No one was convicted of his murder.

All content from Kiddle encyclopedia articles (including the article images and facts) can be freely used under Attribution-ShareAlike license, unless stated otherwise. Cite this article:
Richmond Bridge (Tasmania) Facts for Kids. Kiddle Encyclopedia.